Ten things I did in Illinois this weekend:

I spent the weekend down in Illinois visiting a lot of people I've known for a very long time. First stop: Dekalb, to visit my Grandma. We had lunch at Steak 'n Shake, a venerable Midwestern quick-service chain. I decided to go there in large part because September 11 was my mom's birthday, and Steak 'n Shake was her favorite restaurant, for much the same reason it's Roger Ebert's (see link above). Grandma and I also went grocery shopping; she doesn't drive anymore, and while she can take a bus from her retirement community to the local Walmart Supercenter to shop, she likes to go to the Jewel when my sister or I visit so she can get things she wouldn't be able to carry home comfortably on the bus.

That evening, I met my friends Mimi, Jean, and Bob for dinner in downtown Wheaton. I've known Jean and Mimi (Jean's mom) since I was in grade school. Jean was my brother's high school girlfriend, but over the years I've gotten to be good friends with her too. Bob is Jean's husband; of the people I did things with this weekend I've known him the least amount of time. Fifteen years, maybe? Can't really remember. After dinner we all walked around downtown Wheaton and commented on all the store that were no longer there. We're old!

On Sunday, I took the train into Chicago. I had three hours to kill before meeting the person I'd come to the city to see, which time I spent having lunch, visiting the Chicago Architectural Foundation shop and walking up and down Michigan Avenue, and visiting the Art Institute of Chicago. I originally thought I might look at some art while there, but I only had an hour by the time I got there and a ticket cost $18, which didn't seem cost effective ... so I went to the gift shop and spent twice that much in a third of the time. Good plan. 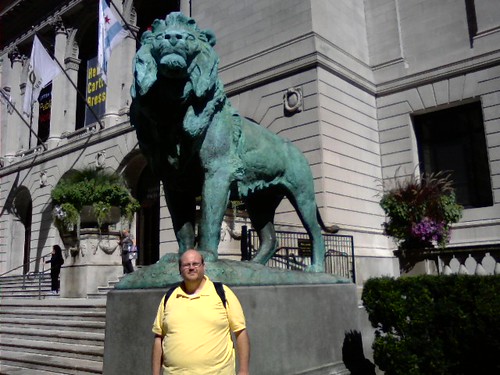 Eventually I made my way over to Millennium Park, where I met my high school friend Gretchen in front of Cloud Gate, a.k.a. the Bean. We walked through the park and across the pedestrian bridge that spans Columbus Drive, linking Millennium Park to Grant Park, where we found a bench and spent 90 minutes or so enjoying the beautiful day and catching up. Eventually we left there and walk aimlessly around the Loop for another 45 minters or so before finding another bench at Daley Center Plaza (site of the Chicago Picasso) where we spent a few minutes watching some BMX bikers doing tricks before parting ways. I made my way back to the train station, where i ended up having to sit around for an extra hour due to the inbound train that would have become my outgoing one having struck and killed a pedestrian near River Forest.

I took a lot of pictures; if you care to see them, I've put them up on Facebook. As always, you need not be my Facebook friend nor a Facebook member at all to see them, but if you are on FB and aren't my friend, go ahead and friend me! Unless you don't want to.