Advent Art: Visitation, from Altarpiece of the Virgin 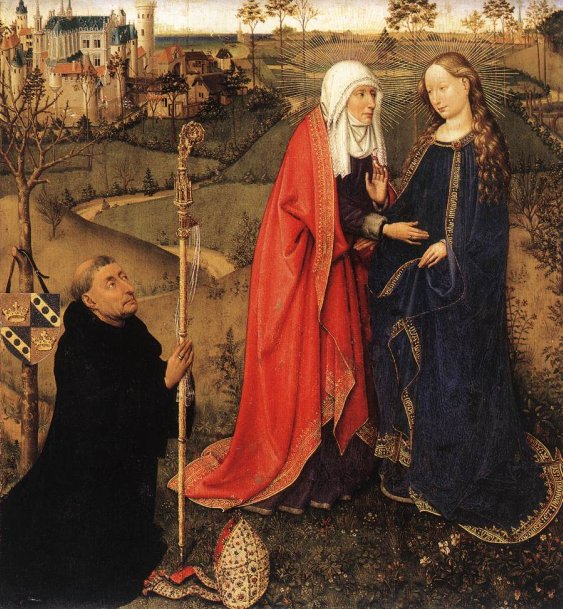 Our look at the pre-natal adventures of Jesus continues with the Visitation, which is the story of how an attempted invasion of Earth by an alien race in 1666 ultimately resulted in the Great Fire of London. Wait, what? Oh, sorry, that was the 1982 Doctor Who episode "The Visitation." In Biblical terms, the Visitation is the visit of Mary to her relative Elizabeth, the mother of John the Baptist. From Luke 1:39-56 (New Living Translation):

A few days later Mary hurried to the hill country of Judea, to the town where Zechariah lived. She entered the house and greeted Elizabeth. At the sound of Mary’s greeting, Elizabeth’s child leaped within her, and Elizabeth was filled with the Holy Spirit.

Elizabeth gave a glad cry and exclaimed to Mary, “God has blessed you above all women, and your child is blessed. Why am I so honored, that the mother of my Lord should visit me? When I heard your greeting, the baby in my womb jumped for joy. You are blessed because you believed that the Lord would do what he said.”

In Roman Catholic and Eastern Orthodox theology, the purpose of the visit was to bring divine grace to Elizabeth and cleanse the still-unborn John the Baptist of original sin. In other Christian traditions, no one gives a darn about the Visitation at all. Every so often pastors will feel compelled to preach on it this time of year because it's, you know, right there at the beginning of Luke, and they've got to talk about something on the first Sunday of Advent.

For another take on the Visitation, take a look at my Advent entry for December 17, 2009, in which a learned rabbi discusses how unlikely it was that Jesus ever lived in Nazareth, and uses the story of the Visitation to reinforce his point.