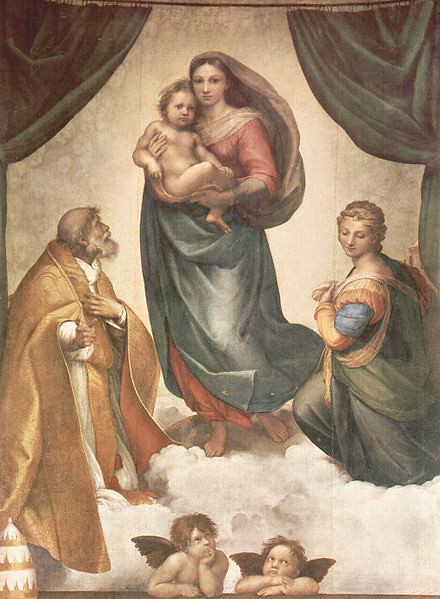 With a name like Sistine Madonna, you might expect to find this work in the Sistine Chapel. And that would make a lot of sense, because Raphael was Italian and many of his best works can be found in the Apostolic Palace in Vatican City, but in fact this painting is in Germany. Go figure. (Its name comes from the Monastery of San Sisto in Piacenza, which commissioned the painting.)

This is certainly one of the most familiar works by Raphael, not so much for the Madonna and Child at its center or for the portraits of Saint Sixtus (San Sisto in Italian; see how this all ties together?) and Saint Barbara flanking them, but for the cherubs at the bottom, which have been reproduced on everything from stamps to condom wrappers. I might venture to say that the cherubs in and of themselves are the most famous things Raphael ever painted.