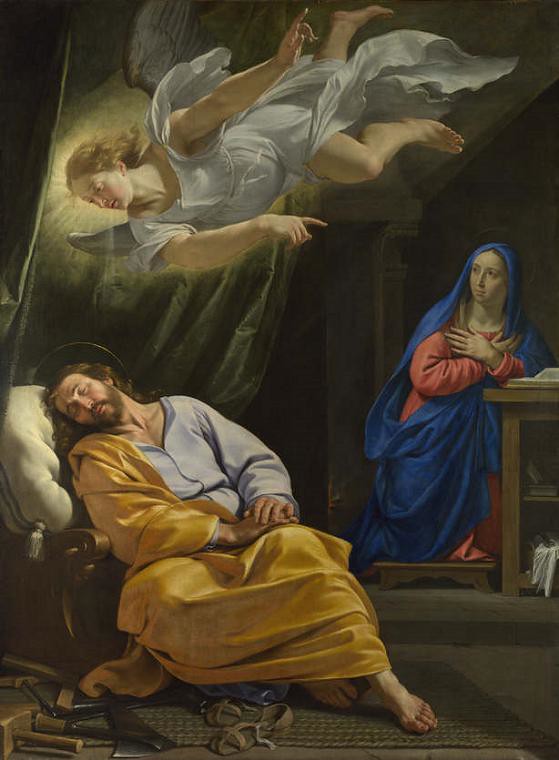 Taking another look back at the prenatal life of Jesus, here we have the angel appearing to Joseph. This story can be found in the Gospel of Matthew, chapter 1, verses 18 through 25 of the New Living Translation:

This is how Jesus the Messiah was born. His mother, Mary, was engaged to be married to Joseph. But before the marriage took place, while she was still a virgin, she became pregnant through the power of the Holy Spirit. Joseph, her fiancé, was a good man and did not want to disgrace her publicly, so he decided to break the engagement quietly.

As he considered this, an angel of the Lord appeared to him in a dream. "Joseph, son of David," the angel said, "do not be afraid to take Mary as your wife. For the child within her was conceived by the Holy Spirit. And she will have a son, and you are to name him Jesus, for he will save his people from their sins."

All of this occurred to fulfill the Lord’s message through his prophet:

"Look! The virgin will conceive a child!
She will give birth to a son,
and they will call him Immanuel,
which means 'God is with us.'"

When Joseph woke up, he did as the angel of the Lord commanded and took Mary as his wife. But he did not have sexual relations with her until her son was born. And Joseph named him Jesus.

This aspect of the, ah, pre-Nativity is not one you hear about much. For one thing, the Nativity story as related by Matthew is pretty rudimentary, so people tend to focus on Luke more so than Matthew. (Except for the part about the visit of the Magi, which isn't mentioned by Luke at all.) Also, it may be that some people are uncomfortable with the idea that Joseph was a normal man who was upset to learn that his betrothed was already pregnant with someone else's baby and wanted to break the engagement. ("WHAT? HOW COULD YOU DO THIS TO ME? GIVE ME BACK THE RING!") And since Roman Catholic and Orthodox churches teach that Mary was aeiparthenos, perpetually a virgin, they would no doubt just as soon overlook that verse 25 suggests that Joseph had sexual relations with her after Jesus was born.

Anyway, the point is that there really aren't that many depictions in art of Joseph's dream. His first dream, I should say, since he had another one after Jesus was born ... but more about that later.