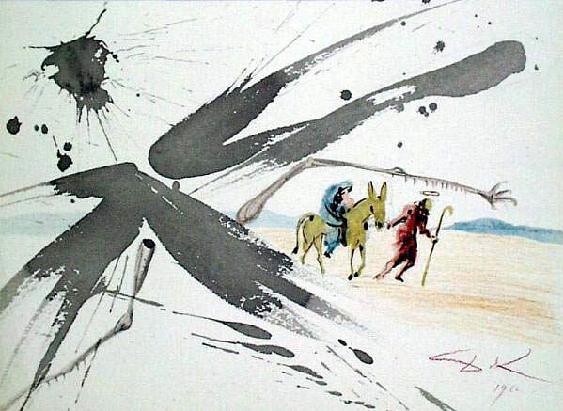 The flip side of the Massacre of the Innocents was the Flight into Egypt, which is described in the second chapter of the Gospel According to Matthew, verses 13 through 15:

After the wise men were gone, an angel of the Lord appeared to Joseph in a dream. "Get up! Flee to Egypt with the child and his mother," the angel said. "Stay there until I tell you to return, because Herod is going to search for the child to kill him."

That night Joseph left for Egypt with the child and Mary, his mother, and they stayed there until Herod’s death. This fulfilled what the Lord had spoken through the prophet: "I called my Son out of Egypt."

That last bit is a quote from the Old Testament: Hosea 11:1. (It is also an English translation of the Latin phrase that serves as the title of this lithograph.) Later in Matthew 2 comes the answer to the question I posed yesterday about why the Holy Family was still in Bethlehem instead of back home in Nazareth:

So Joseph got up and returned to the land of Israel with Jesus and his mother. But when he learned that the new ruler of Judea was Herod’s son Archelaus, he was afraid to go there. Then, after being warned in a dream, he left for the region of Galilee. So the family went and lived in a town called Nazareth. This fulfilled what the prophets had said: "He will be called a Nazarene." (verses 21-23)

This, of course, contradicts what it says in Luke 1:26 and 2:4, that Mary and Joseph lived in Nazareth and only went to Bethlehem for the census. This is why people who insist the Bible must be read literally are, in my opinion, nuts.

Confidential to R.Z.: I know I said I don't post things unless I know its current provenance, but I don't know whose collection this lithograph is part of. I know it was sold by the William Bennett Gallery of New York, but I don't know to whom. I'm assuming it was to a private collector, but I don't actually know. However, I gave myself permission to break the rule I invented myself, for no good reason. (That is, the rule was created for no good reason. I'm breaking it for what I think is a good reason, namely that otherwise I wouldn't be able to post this and I really wanted to.)