A couple of other good ones that don't lend themselves to the list format: 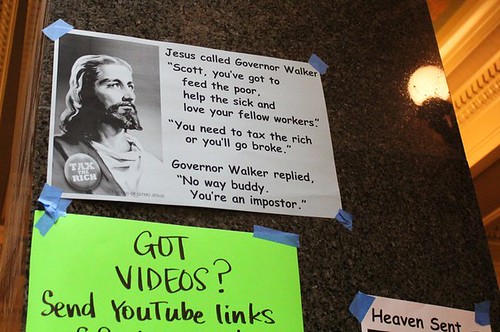 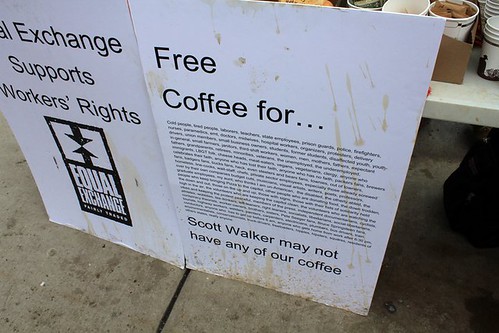 Things have not calmed down in Madison. The fourteen Democratic Senators who fled the state to deny a quorum remain fled. Governor Walker is still refusing to negotiate on the "budget repair bill," though he did find time in his schedule to talk to a reporter pretending to be billionaire David Koch, who contributed tens of thousands of dollars to Walker's election campaign. He's taken steps to try to limit public access to the Capitol: locking all but two entrances, posting state troopers or other law enforcement officers at the doors to prevent people from coming in without a pass from a legislator and an escort, and erecting concrete barriers. (But he allegedly sneaked a bunch of his supporters into the Capitol through old steam tunnels in time for his budget address.) And earlier today he announced his biennial budget, which includes some $834 million in cuts to public education, $250 million in cuts to the UW System, $96 million in aid to counties and municipalities ... about $1 billion in cuts in all.

In fairness to Walker, it should be noted that is is the first time in more than a decade that the budget has been balanced without resorting to accounting tricks. On the other hand, the approach he took to balancing the budget is a short-sighted and somewhat unserious one, because he refuses to look at the revenue side of the ledger. So while this budget is balanced without tricks, we'll still have the same structural deficits to deal with when it's time to prepare the next biennial budget, because the programs that are insufficiently funded now are still going to be insufficiently funded, unless costs remain absolutely static in that time, or the economy rebounds far beyond the modest (but still overly optimistic, in my opinion) increase projected in the budget.