Ten unions of the AFL-CIO:

IUPA, National Nurses, and the UAW have been pretty active during the ongoing labor protests at the Wisconsin State Capitol. The Guild of Italian American Actors and California School Employees Association, not so much, but I'm sure that has more to do with geography than anything else.

Speaking of the protests, I made my debut at the Capitol this past weekend: 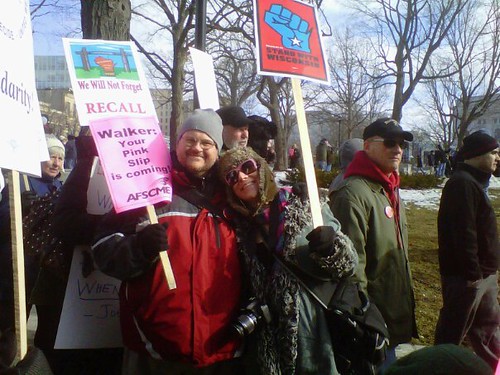 That's my friend Gretchen next to me. She's one of those out-of-state agitators you've heard Governor Walker complaining about; she came up from Illinois with several of her friends drove up from Chicago to take part in the rally. Before she got there, my sister and I had watched the Tractorcade, a gathering of farmers who had brought their tractors to Madison to protest the proposed budget. (The health care cuts in the budget would hurt many farmers, one in seven of whom are on Badgercare, the state's program for individuals whose employees don't provide health care and who make too much to qualify for Medicaid.)

After she left, I headed down to Memorial Library to take part in a march up State Street sponsored by AFSCME. (My union, WSEU Local 2412, is an AFSCME affiliate.) That's where I got the uppermost of my two signs. The pink one I got from an AFSCME booth on the Square; the pole (and the sign to which the recall one is stapled) came from MTI, the Madison teachers's union. There are signs on the back of my stick too: A handwritten Kloppenburg for Justice sign from MTI and another one from AFSCME. Can't remember what that one says though.