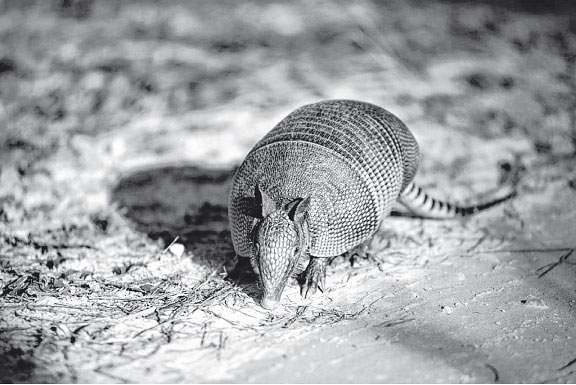 The News-Press of Ft. Myers, Florida, does its part to keep the mainstream media relevant with an informative feature on everybody's favorite Xenarthran. I think the author was working from an outdated reference source; that armadillos carry leprosy is fairly well established at this point.

news-press.com is a Gannett property, which means this article may eventually disappear behind a firewall, so I've placed the full text behind the cut.

These armored sticky-tongued nocturnal creatures migrated to Florida in the early part of the 20th century. Despite being in need of some corrective lenses for their chronic nearsightedness, nature's little tanks have adapted well to life throughout the Sunshine state.

The word "armadillo" comes from Spanish, and means "little armored one." Contrary to popular belief, the nine-banded armadillo cannot roll itself into a ball to escape predators. Only one variety - the three-banded armadillo - can roll up. The other types have too many bony plates to allow them to curl up. Other armadillos rely on their shells for defense while they scuttle away through thick, thorny brush or dig themselves a hole.

Armadillos are not blind, but they do have poor eyesight. They rely on their ears and noses more than their eyes to detect food or predators. If you're close to an armadillo, and stay quiet and still, the chances of it not noticing you are there are fairly good.

Nine-banded armadillos always give birth to four identical young - the only mammal known to do so. All four develop from the same egg - they even share the same placenta.

Armadillos are used in leprosy research because their body temperatures are low enough for them to contract the most virulent form of the disease. But long-standing rumors that they carry leprosy are false. To the contrary, state wildlife officials say, no Florida armadillo has ever tested positive for leprosy.

Some female armadillos being used for research have given birth to young long after they were captured - up to two years afterward in some cases. These ""virgin births" are a result of the female's ability to delay implantation of the fertilized egg during times of stress. This tactic is one reason armadillos are so good at colonizing new areas.

Armadillos like to swim, and are very good at it. They have a strong dog paddle, and can walk along the bottom of streams and ponds. They can hold their breath for as long as six minutes at a time. When they need to cross larger bodies of water, they swim. Their heavy shell makes floating tough, so they gulp air into their intestines to make them more buoyant.

Armadillo teeth have no enamel. They also have very few teeth - just several peg-like molars. Since they primarily eat insects, they don't do a lot of heavy chewing, making big, strong teeth unnecessary.