Community 101 group. It was a bit more ambitious than the last one; it was, appropriately for a Community crossword, a metapuzzle. That is, after solving the crossword, you had to answer a question: What episode inspired the puzzle? The three longest answers in the grid--the theme entries, in crossword lingo--pointed to one and only one episode. But in fact, it was theoretically possible to identify the episode just by reading the clues, making it a metametapuzzle or something. We'll get to that in a minute. If you want to try your hand at the puzzle before I tell you the answer, click here before following the lj-cut below.

First of all, here's the completed grid. If it's too small for you read, click it to see it at its full size: 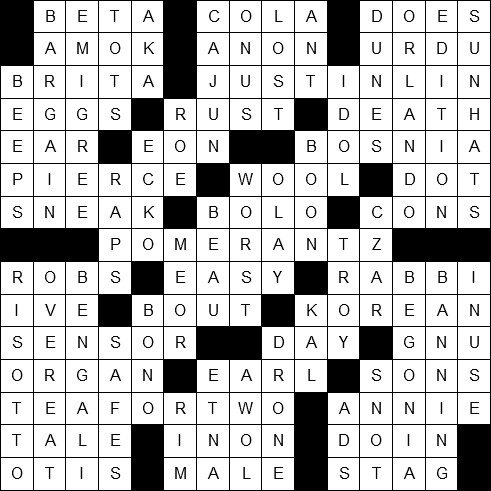 If you ask me, that's a pretty nice grid. Yeah, there are a couple of cheater squares (or helper squares, as some prefer), and the fill is kind of uninspired, but there's no crosswordese to speak of and few if any words that would be unfamiliar to anyone clever enough to be a Community fan. The only word I really don't like is EMIGREE, but it's a legit if uncommon variant on the word émigré. On the other hand, it was included in default word list for Crossword Compiler, the program I used to generate the fill, so who am I to bitch? (Speaking of which, the demo version of Crossword Compiler I used wouldn't let me save the file in a shareable format, and I couldn't justify paying for the unlocked version, so after I made the grid and generated the fill, I recreated the whole thing as a table in my word processor for the PDF version and put together the electronic versions by extracting the XML file from a CrosSynergy Syndicate puzzle and editing it with text editor.) I did a bit of the fill by hand: I reworked the middle section pretty extensively to get WORST in there; and I made various adjustments to the top left corner, trying BEDS (crossing DOTS and SKA) and BERT (crossing RATS and TSA) in 1-Across before landing on BETA. (And that corner would have been a lot uglier if I hadn't manually entered ECKO at 23-Down before generating the fill.)

Anyway, as you can see from the grid, the answers to the theme entries were:

The first two would have been enough to identify the episode for anyone who has a really good memory for who wrote and directed what episodes or who, as I did when composing the puzzle, referred to Wikipedia's List of Community Episodes article, which lists the writer and director of every episode. (And just so you folks who don't usually do crosswords know: speaking as a veteran solver, Googling or flipping to the back of the book is perfectly fine. I know of no solvers who have never looked up an answer, and anyone who tells you they never have is either lying or leaves a lot of puzzles unfinished.) As for the song, it's perhaps not the most familiar song to modern audiences, but on the other hand Pierce says the name, so it's not like it was that esoteric.

But as I said, it was theoretically possible to solve the puzzle just by reading the clues. Five clues in particular:

Can you see the pattern there? Here, watch this:

For those who can't watch videos, the video is the tag to "Interpretive Dance," which shows Troy and Abed solving a crossword together. This, more so than the episode as a whole, is what inspired the puzzle: I wanted to make a crossword that contained the same five clues and answers that were mentioned in the tag. I genuinely thought that [One of the two brother actors Bridges] might be enough for some particularly obsessed fans to guess the episode right off, since that clue sets up the punchline. Indeed, in an earlier version of the grid, BEAU appeared at 1-Across, and I moved it precisely because I was worried it would give away the game from the very first clue.

The earliest version of the puzzle had no theme beyond the five clue-and-answer pairs from the tag. The three nine-letter entries--DAN HARMON, POMERANTZ, and COMMUNITY--were relevant to the show in general but not necessarily to "Interpretive Dance" specifically. At some point along the way, I checked the aforementioned List of Community episodes article and realized that JUSTIN LIN had nine letters, so I decided to use his name in place of COMMUNITY. Around that same time, the idea of making it a metapuzzle occurred to me, so I worked in TEA FOR TWO in place of DAN HARMON.

Then I realized that when I reworked the grid to get JUSTIN LIN in there, I had accidentally removed BEAU from the grid (the U had crossed COMMUNITY). And that's where things started to go off the rails. I decided that instead trying to fit BEAU back in, I would make that it was missing part of the puzzle: name the episode, and the word that is missing from the puzzle. My reasoning was that once people figured out the episode, and realized that its tag featured a crossword puzzle, it would be easy to pick out which of the clue-and-answer pairs from the tag was missing from the puzzle. In talking it over with

htbthomas, I decided to make it easier by putting BEAU back into the puzzle and taking out TROY. BEAU was the punchline of the tag, making it more likely people would recognize that as having come from the tag than TROY. Also, TROY was a snap to remove from the grid; I only needed to change the Y to an N. Then, to make it even easier by making sure Troy wasn't mentioned in the clues either. With his name alone among the regular characters missing both from the grid and the clues, it would be a simple matter to identify TROY as the missing word.

In retrospect, this line of reasoning was completely ridiculous. I myself didn't remember which episode had featured a crossword in the tag until I Googled it, and I had to watch the tag again to be reminded of what the clue-and-answer pairs had been. My first test-solver, Community fan and experienced crossworder @puxxled, really drove the point home when he test-solved it for me; he got the episode, but it wasn't until he went back and watched some clips that he saw that I had "lifted some of the clues," and even then he didn't grasp that my having used only some of the clues was the point and the crucial hint to figuring out the missing word. And he's a smart guy, wise to the wily ways of crossword constructors! It had to go. The clue-and-answer pairs would be an Easter egg, not an integral part of the puzzle.

So I changed the N back to a Y, losing a pair of really good clues in the process. DAN had been clued as [Emmy Award-winning songwriter Harmon]; TRON, as [1982 film Dean Pelton has never heard of]. That had the effect of removing the Dean from the puzzle, and I wanted every regular character to be mentioned in either the grid or the clues, but luckily @puxxled had expressed some concern about my having originally used [Bambi's dad, for one] as the clue for both 62- and 63-Across, so I rewrote 62 to mention the Dean.

Those changes made, I sent the puzzle off to

htbthomas for a second test-solve. In my earlier conversations with her about the puzzle, she had cautioned me not to make the puzzle too hard, which she thought would "make it fun for people (like me) who aren't the best crossword puzzle solvers," so I wanted her perspective on whether I had accomplished that goal. She had no complaints other than that she had caused herself some trouble by entering PIANO in place of ORGAN, which was originally clued as [Keyboard instrument]. It hadn't even occurred to me that there was more than one five-letter answer to that, so I made it less ambiguous with what is probably my favorite clue, [One of many bought from questionable sources by Cornelius Hawthorne]. And since I ended up posting the puzzle on the day after Thanksgiving, I reclued BARGAIN from [Haggle] to [Black Friday deal].

bookcat (who posted her answer a mere 18 minutes after I uploaded the entry!), @krl1327,

slutbunwalla, all of whom correctly identified the episode. Big thanks to them and to everyone else who gave it a try.