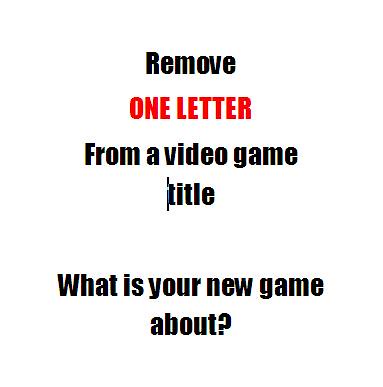 My brother shared this image on Facebook the other day. (Actually, I made this image myself, based on the one he shared. I didn't like the text justification on the original.) I offered a few game titles and descriptions, then shared it on my own Facebook wall for my own friends to see and comment on. In a moment, the results of that post.

And those of my friends and relatives:

TWoP pal Debbie: Angry Bids -- RPG you are the auctioneer and must identify the first and highest bidder from a mob of angry shoppers.

silver05: Left or Dead - the world's most frustrating maze game.

College pal Melissa: Hosts of Mistwood: about being really polite and welcoming and inclusive.

College pal Kirsten: Gone with the Win: The Yankees leave the South alone after winning the war & skip the Reconstruction Era.
(There's a Gone with the Wind video slot machine, so I allowed it.)

High school pal Kaarin: Words With Fiends. You lose, you forfeit your soul.

A variation was proposed:

Junior high school pal Emily: Can I add a letter? "President Evil", about the parallel future world where the other candidate won the election?

And some of us tried Emily's variant:

jheaton: Dragon's Flair, in which kickboxing legend Don "The Dragon" Wilson, reduced by hard times to serving at the family restaurant Chotchkie's, must gather enough funny buttons and pins to stop the manager from firing him.

Add your own in the comments, if you're so inclined!