I think I've made it clear in the past that I am a fan of Community, and like most Community fans I'm also a fan of Dan Harmon, the creator of the show. About 18 months ago, Harmon started doing periodic live shows in the Los Angeles area, during which he would get up on stage and, assisted by his friend Jeff Bryan Davis, talk about whatever crossed his mind. The name of the show: Harmontown. Remember that controversy a few months ago when Harmon caught heat for playing angry voicemails from Chevy Chase in public? That was at a Harmontown show.

Anyway, after Harmon was fired as Community's showrunner, he took to doing the shows weekly and releasing them as podcasts. Not too very long after that, he decided to take the show on the road: Harmoncountry! Against all odds, they scheduled one of the shows in Madison, and I said, "Hokey smokes! I am so going to this." (Inasmuch as one can say something on Twitter.)

And I did! Last night! I went into it knowing nothing about the podcast other than that it existed — I'd never listened to an episode — so everything was a fun, hilarious surprise. Here are some crummy pictures I took while I was there. (Plus some better ones I stole from other people who were there.)

The Harmontown logo was displayed just below the proscenium arch of the Majestic Theater stage, where the show was held. You probably can't read it thanks to my crummy, low-resolution cameraphone, but the motto at the bottom of the logo says scribimus latinum sine intellectum, which means, "write Latin without understanding." An odd motto, given the show is mostly stream-of-consciousness rambling — which is to say, unwritten — and none of the show was in Latin. 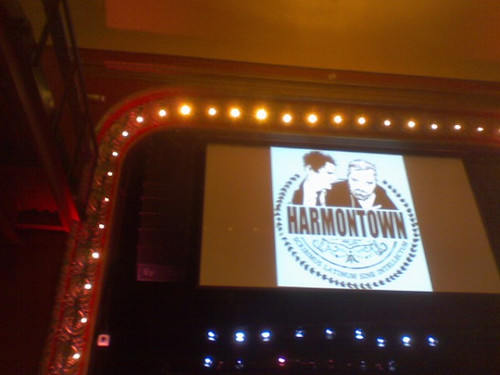 Very soon after the start of the show, Harmon invited his high school friend "Frito" up on stage to talk about how he (Frito) had lost part of his big toe on Christmas Eve. 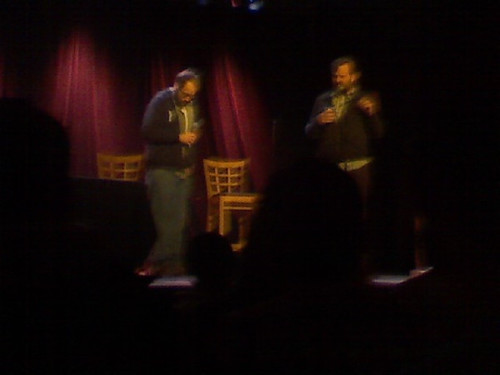 Later he took off his shoe to show the audience his bandaged foot.

Harmon also brought his former improv teacher Bob Orvis (center) up on stage to play a story game. One of them started the story, and when the guy crouching in front pointed at someone else, that person would take over the story. (The guy on the left is Spencer, the podcast's dungeonmaster — see next photo — and the woman is Harmon's girlfriend Erin McGathy.)

Photo by livewithheathermae on Tumblr

Near the end of the show, McGathy, Harmon, and Davis played a few turns of an ongoing Dungeons & Dragons game they've been playing during the shows since last August. Notice that Frito is still up there; he didn't take part in the game, though he did kibitz a bit. 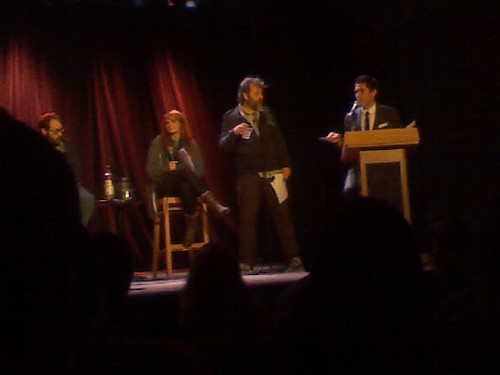 (Here's a less sucky photo of the game.)

And then at the end Harmon lay down on the stage and Davis pretended to hump him.

Photo by livewithheathermae on Tumblr

Anyway, it was a great show. (The reviewer for 77 Square liked it too!) Definitely worth going out in zero-degree wind chill for.