This week in the arts

I watched six DVDs this week:

A few weeks ago I saw an A.V. Inventory about opening-credits sequences that evolved with their series. The first series listed: Big Love, the HBO series about a fundamentalist Mormon family in Utah that practices polygamy. I'd never had much interest in the show, thanks to the presence in the cast of two actresses I've never much cared for, Jeanne Tripplehorn and Chloë Sevigny. But the original opening-credits sequence was intriguing (if maybe a little heavy-handed with the metaphors), so I decided to check out the first disc of the first season DVD set. I didn't dislike the first two episodes, but neither was I blown away by them. I liked Tripplehorn more than I expected, but I had very low expectations based on the negative impression I formed of her acting talent. Sevigny was OK, I guess, though I didn't like her character. I'll go ahead and watch the next three episodes, just to give it a fair shake, but at this point I'd be surprised if I keep watching past that point. 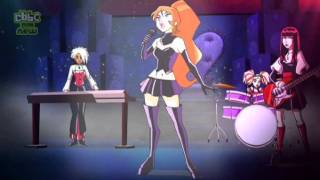 Having enjoyed the first four episodes, I moved on to the second and third discs of season one of Scooby-Doo: Mystery Incorporated. And let me tell you, if I hadn't already known that this was a fairly radical departure from previous versions of Scooby-Doo, one of the episodes on the second disc, "In Fear of the Phantom," would have clued me in, thanks to the image seen here and, indeed, the entire segment in which it appears. I predict this creates an entire generation of redhead fetishists. Anyway, I liked the four episodes on the disc, which offered four more episodes, which managed satisfy my nostalgia for the original series without sacrificing the qualities I've come to enjoy as an adult, such as faster pacing, sophisticated storytelling, and sexy redheads. (It has a lot in common with Amy Pond-era Doctor Who in that sense.) I'm already growing a little tired of the variations on "And I would've gotten away with it if not for you meddling kids!" that come near the end of each episode, though. Nevertheless, I'll be moving on to the next first-season disc, which is not season 1, disc 4, as one might expect, but season 1, part 2, disc 1. Weird.

As part of my ongoing effort to watch all the Best Adapted Screenplay Academy Award winners, I watched The Cider House Rules, for which John Irving won the Oscar in 2000. Michael Caine also won an Oscar for this movie, and while I've only seen two of the other performances nominated in the Best Supporting Actor category that year, I think Caine earned on the strength of his accent alone, which was so good I didn't recognize it as Michael Caine's voice when his voiceover started. As for the rest of the movie, it was sort of slow to get moving, but by the end it had engrossed me pretty thoroughly, though I was momentarily thrown out of it when I realized that it was my second movie in five days to feature a character who'd been impregnated by her own father. What are the odds? Anyway, now I've seen the last 20 Best Adapted Screenplay winners, with two more to go before I've seen the last 30.

I took a break from Best Adapted Screenply Oscar winners to take in last year's Best Picture winner, The Artist, which answered a question I'd never thought to ask: what if Singin' in the Rain was a melodrama? Don't get me wrong, I really liked it, especially the dancing, and I was impressed by how well it aped the look and feel of the Silent Era, and by Jean Dujardin's and Bérénice Bejo's performances. Nevertheless, the comparison is so obvious that it never came up even once in any of the several production documentaries or the 45-minute panel discussion included as extras.

I read somewhere that Community's Christmas episode would be a tribute to Alfred Hitchcock's Rope, so I decided to check it out so I'd be prepared whenever the Christmas episode airs.It's an interesting film, if not necessarily a very good one. It's an adaptation of a stage play that largely takes place in a single room, so Hitchcock had the idea of filming it in long unbroken takes, in an effort to recreate the effect of watching the story unfold in real time with as few breaks as possible. The problem is, he usually accomplishes this by zooming in on someone's back or a wall or something, making it perfectly obvious when one take ends and the next begins. Of course, the film was made in 1948, so he deserves a little slack for not being able to accomplish the kind of seamless transitions that are possible with modern technology.

Wordwise, I'm speeding through Northanger Abbey like a chaise and four. I'm already more than two-thirds of the way through, which far outstrips the pace at which I made it through Emma. It's much shorter, of course — the first two-thirds of Emma comprises 36 chapters, versus 22 for Northanger Abbey — but there's no denying that the latter is just more fun to read. Maybe that's why there have been so many more adaptations of Emma than of Northanger Abbey. (That Northanger Abbey is a literary parody probably has something to do with it as well; that sort of thing may not play as well on screen as on the page. I'm considering taking a break after I finish to read The Mysteries of Udolpho and perhaps some of the other Gothic novels mentioned in the novel before moving on to Persuasion. (Actually, I'll be taking a break regardless, to read Richard Russo's new memoir, Elsewhere.)

I also read Bill Veeck's Crosstown Classic, which University of Chicago Press was giving away to promote their new Chicago Shorts series: "distinguished selections from the University of Chicago Press’s commanding archive, and the best of our newest books, all priced for impulse buying and presented exclusively in DRM-free e-book format." It turned out to be a pair of chapters from Veeck's autobiography Veeck as in Wreck, one about his experiences working for the Chicago Cubs and the other about how he came to purchase the Chicago White Sox from the Comiskey family. Pretty amusing, though I'm not a big fan of autobiographies. (I'm making an exception for Richard Russo on account of his being Richard Russo.)

In the musical arts, I attended a concert by the Wisconsin Brass Quintet Friday night, featuring the world premiere of piece composed by Quintet member (and University of Wisconsin-Madison horn professor) Daniel Grabois. During his introductory remarks, he said he'd been inspired to write it by an African thumb piano called a kalimba, and mentioned that when he played the kalimba for the Quintet after they'd been rehearsing it, they were baffled as to how the one had influenced the other. And he said, "But that was OK, because the point of being inspired by something is not to copy it, but to make something of it." Which strikes me as a nice way to answer people who criticize fan works, the best of which take material from whatever the original happens to be and transform it into something radically different. I liked the piece pretty well too, though my favorite work on the program was suite of madrigals by Carlo Gesualdo and arranged for brass quintet by WBQ member Mark Hetzler. (But judge for yourself; the concert webcast is archived here. The first half of the concert is below the second half, oddly.)