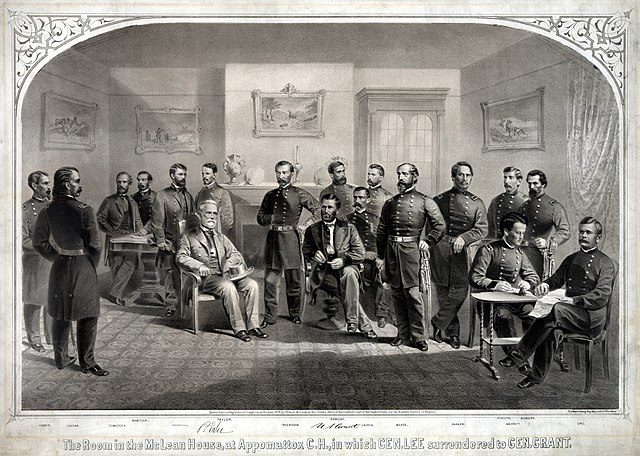 I see on the Wikipedia that today is the 148th anniversary of Confederate General Robert E. Lee surrendering the Army of Northern Virginia to Union Gen. Ulysses S. Grant, for all intents and purposes ending the Civil War. Seeing that, I couldn't help think back to the scene in Lincoln when the President and Rep. Thaddeus Stevens are talking privately in the White House kitchen about the upcoming battle in the House of Representatives to pass the 13th Amendment, during which Stevens speaks of his vision for Reconstruction:

THADDEUS STEVENS
When the war ends, I intend to push
for full equality, the Negro vote
and much more. Congress shall
mandate the seizure of every foot
of rebel land and every dollar of
their property. We’ll use their
confiscated wealth to establish
hundreds of thousands of free Negro
farmers, and at their side soldiers
armed to occupy and transform the
heritage of traitors. We’ll build
up a land down there of free men
and free women and free children
and freedom.

I'll admit to not being very familiar with Stevens prior to seeing Lincoln last Thursday, so prior to that scene I was unaware of his views on Reconstruction, which I'm told are faithfully portrayed in the dialogue above, which was invented for the movie by Tony Kushner. Frankly, I like his vision for Reconstruction — in the movie, Lincoln calls it "the untempered version" — and I think this country would be in much better shape today if his vision had become reality. Failing to thoroughly break the power and the spirits of the Southern oligarchy was a huge mistake, and one we're still paying for. You think we'd still be talking about segregated proms in 2013 if Stevens had had his way>

Of course, Stevens's vision could never have become reality; his views were too radical even for the majority of his own party. But it would've been nice if we'd come a little closer than we did.