On the racial politics of street addressing

A credit union on Madison's north side was robbed Tuesday afternoon, according to Madison police. channel3000.com/news/East-side…

Man! I'll want to stay away from those two places! I live on the east side, so let's read that article first:

I shop at the Hy-Vee near there! I'll need to keep an eye open for bank robbers next time I'm over that way. Now let's see where that one on the north side is:

Police were called to Summit Credit Union at 1799 Thierer Road at 3:57 p.m. after a man walked into the credit union and demanded money.

Not for the first time, I find myself wondering why Madison, a city defined by an isthmus that runs diagonally from the southwest to the northeast, which isthmus is bisected by a river flowing northwest to southeast, uses cardinal directions to describe quadrants of the city, rather than ordinal points. An ordinal quadrant system — by which I mean a system whereby the quadrants are defined by axes running from northwest to southwest and southwest to northeast, as opposed to north-south and east-west axes, such as in Washington, D.C. — is perfectly workable; Cedar Rapids, Iowa, uses such a system, with the Cedar River forming the NW-SE axis and U.S. Highway 151 (business route) as the SW-NE axis.

Cedar Rapids is actually a very sensible city to look to with regard to establishing an ordinal quadrant system in Madison, because U.S. 151 runs through both cities. It works for them, so it would work for us too. Better, in fact, because Business 151 through Cedar Rapids is a twisty mess, whereas in Madison it runs pretty much due SW-NE along Washington Avenue, except for a brief stretch that veers south down Park Street and then west on the Beltline to avoid Lake Wingra. As for the NW-SE axis, I mentioned the Yahara River earlier, but it would be more sensible to use Wisconsin Avenue and Martin Luther King Jr. Boulevard, which radiate from the Wisconsin State Capitol to the northwest and southeast respectively. The Capitol is already the symbolic center of the city, so it makes sense for it to be the midpoint of the quadrant system. On either side of Lake Monona, we'll use the Yahara River as the dividing point. Thus: 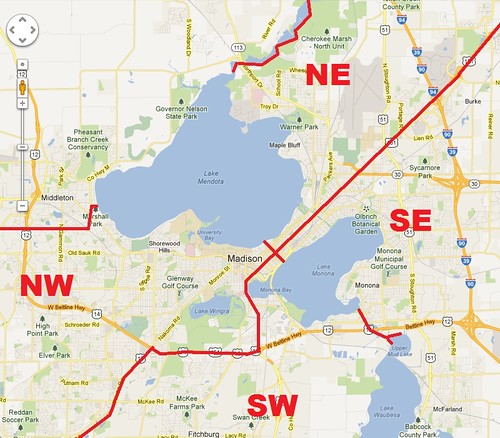 Unfortunately, this would require every address in the city to be changed, which might make it somewhat unpopular. But my feeling is that Madison's address schema is already a dog's breakfast, and that it should be changed. For addressing purposes, the north-south dividing line is as follows: Milwaukee Street east of the isthmus; Washington Ave. across the isthmus; Regent St. west of the isthmus to Owen Park; Inner Drive and Colony Drive between Owen and Walnut Grove Parks; Brule St. between Walnut Grove Park and the Beltline; and finally Mineral Point Rd. west of the Beltline. So if you compare two similar addresses on opposite sides of town — say 209 N. Junction Rd. on the west side and 209 N. Marquette St. on the east — you'll find they could be as far as 2.67 lateral miles apart. Madness!

That said, my map places much of the southeast side pretty far north of the northernmost point of the northwest side, which is admittedly counterintuitive, and the southwest quadrant is tiny. (The actual borders of the city do not encompass all the area shown inside the quadrant boundaries I drew.) So I'm willing to use the existing north-south boundary line, ridiculous though it may be, so as to alleviate some of the burden of readdressing. That way, N. Junction Rd. would become Junction Rd. NW, but the number would stay the same. It's a perfect compromise! 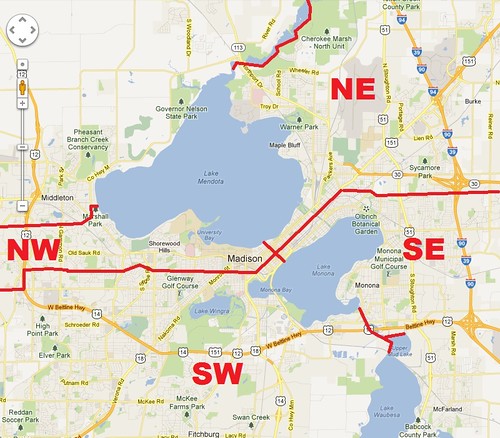 Except it's still kind of counterintuitive. I live north of where I go to church, but my house would be in southeast and the church in northeast. And now the northwest quadrant is awfully small, though fairly densely populated. But I think the biggest problem is political; it throws a lot of people who live on what’s commonly understood as the "west side" into the same quadrant as the "south side," which I think would cause some of those west-siders profound psychological discomfort, because …

Well, let me first say a little something about Loudoun County, Virginia, where I lived before moving to Madison. On the eastern side of the county, there's a planned community called Potomac Falls. Loudoun County is largely unincorporated, so place names tend to be based on ZIP codes as much as anything else, and Potomac Falls was, by virtue of its ZIP code, in an area called Sterling. Which was a problem for many Potomac Falls residents, because south of that community, in the same ZIP code, is an older planned community, built in the 1960s, called Sterling Park, which is the opposite of Potomac Falls in many ways: the houses and infrastructure are older; the residents are poorer and less white. And a not uncommon feeling among Potomac Falls residents was that if they had to say they lived in Sterling, that might give the impression that they had something in common with those people in Sterling Park. So they lobbied and obtained permission from the U.S. Postal Service to use Potomac Falls as an alternate name for the Sterling ZIP code. They also — and this boggles my mind to this day — convinced the U.S. Geological Service to officially designate the geographic area where the development was located "Potomac Falls." All to avoid the stigma of having to associate, even in name only, with those people in Sterling Park.

Now, the west side of Madison is a pretty liberal place, far more so than Potomac Falls, but they have a high median income and a largely homogeneous population in common. Similarly, the south side of Madison has a fair amount in common with Sterling Park. And the fact is that the racial and economic divide in this city is big, and getting bigger. You see it everywhere, if you bother to look: in the widespread opposition to Madison Preparatory Academy for Young Men, the Urban League's proposed charter school specifically designed to help disadvantaged African American and Latino boys; in the talk about how unsafe Madison Metro's South Transfer Point feels after dark; in the large number of performance venues in Madison that are prohibited by their leases from booking hip-hop acts, or just refuse to; in the since-abandoned policy of some downtown bars to no longer accept Wisconsin State ID cards as proof of age. And there's a school of thought, no pun intended, that Sarah Manski, whose decision to pull out of a school board race after winning the primary election I wrote about in February, entered the primary specifically to prevent a pro-Madison Prep Latina off the ballot.

So yeah, I think some of those west-siders would fight fiercely against being placed into a quadrant that contains the south side neighborhoods. So might some of the small portion of current eastsiders who would become northeasterners, because like the south side, the north side is less affluent and less white than the city generally and the neighborhoods east of the Capitol and north of Washington Ave. particularly, and won't somebody please think of the property values? (That said, I believe that sort of feeling is much more likely to be found on the west side than on the east, which is much more economically heterogeneous.) Madison may be a lot more liberal than a lot of places, but it's no less apt to marginalize its lower class. And I mean that somewhat literally; the west and east sides sprawl across the city, while the north and south are comparatively tiny. Because the people who hold the political and economic power in Madison, whether they're willing to say so or not, want it that way.

Well. That went in directions I didn't expect. (Again, no pun intended.) All I really had in mind when I started this was to poke a little fun at Channel3000.com and the Wisconsin State Journal, and it grew into this whole big thing. Go figure.