More about that plaza

On my way downtown this morning to see Milkhouse Radio at Grace Episcopal, I got off a few stops early to take a closer look at the rooftop plaza I mentioned the other day. Why? No good reason, really, but the last time I was there I didn't know it was a roof, so I thought I'd go down and take a look at the front of the building and see what there was to see.

One thing I saw was the name of the building: Crowley Station. Knowing the name turned out to be pretty helpful in terms of gathering further information about it. For example, I found this in the annual report of the First Neighborhood District, the residential neighborhood in which the station lies:

The Friends of the Crowley Station have made improvements to the Water Utility property at the foot of S. Franklin St. on E. Wilson St. Last summer, we replanted grasses in a narrow strip of ground between the building and sidewalk along Wilson St. after our first plantings were destroyed last spring by utility work. This second round of plants survived the winter and are doing very well. It's pleasing to see how this simple change has enlivened and softened the feel of what was an uninviting and rather harsh urban space. We've also had new bleacher and bench seating installed along with some free standing furniture and our neighborhood's very own Little Free Library. We're continuing to work on additional improvements and fund raising this summer, and we're always looking for volunteers to join us.

I also learned that the plaza developed in response to a specific recommendation in the city's Master Plan for the First Settlement neighborhood: "The deck of the reservoir building on E. Wilson Street should be improved as a public open space." The plan noted the "potential to create an entrance and focal point for the neighborhood" at that site, and suggested "a neighborhood entrance sign and a historic walking tour directory" be placed there. It even contained a conceptual sketch of a Frank Lloyd Wright-inspired design for the site: 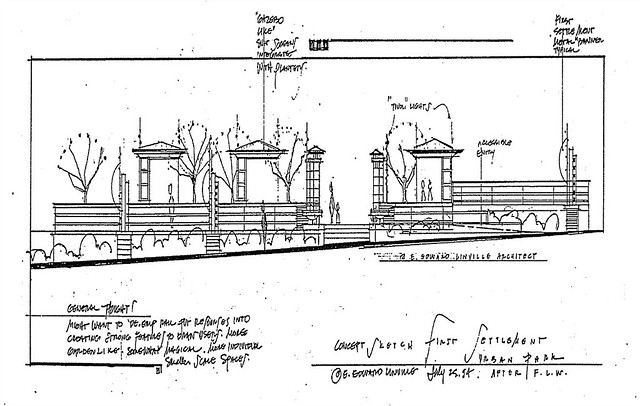 Via City of Madison Department of Planning & Community & Economic Development

Just as a reminder, here's what the site looks like today: 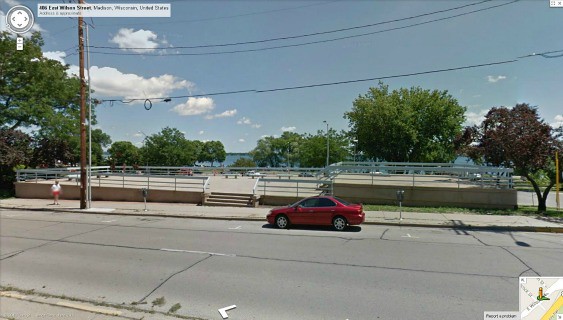 Something seems to have been lost in translation.

That picture is actually a little out of date; as I noted in a comment the other day, the plaza now contains both a Little Free Library (number #87) and a work of public art. Specifically, this one: 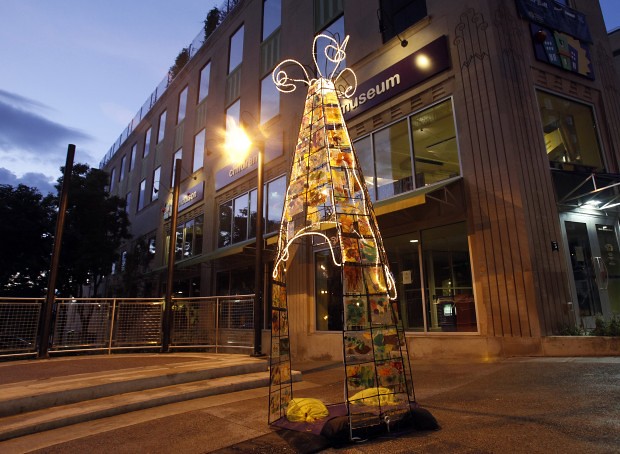 Via madison.com. Photo by Michelle Stocker.

"Light Up the Night" is a rod-and-acrylic-tiles sculpture created local artists Cheryl DeWelt and Erika Koivunen. It was originally on display outside the Madison Children's Museum; visitors to the museum made the tiles. I have no idea how it came to be moved to Crowley Station, though the museum installation was always meant to be temporary. I do remember it showing up there; it was close enough to Christmas and similar enough in shape to a Christmas tree that I took it to be a holiday display, and for a long time I wondered why it hadn't been taken down yet.

One peculiar thing about the installation at Crowley Station: the lights seem to be on all the time. At least, they were on this morning when I stopped to look at it. I say it's peculiar because the city required that the lights be set to a timer when it was on display at the museum. The lights are LEDs, so I don't imagine it uses that much juice, but still, I don't know if it's a sensible use of the city's money to keep the lights on at 10:00 AM on a sunny day.