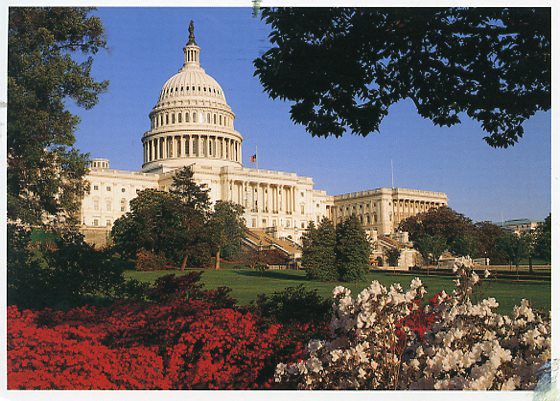 My sister just returned from a trip to Washington, D.C., whence she sent me this postcard of the U.S. Capitol. She wrote on the back that I was a much better tour guide of the Capitol than the one she had on this trip. I know this to be true because she said the same thing on Facebook, and as we all know you're not allowed to say something untrue on the Internet.

I was never an official Capitol tour guide, but I sure gave a lot of them when I worked in the Senate, especially during the two years I worked for Senator Riegle. One of the things Congressional offices routinely do for their constituents is arrange tours of the Capitol. Those tours have to be booked in advance, but nevertheless we frequently had constituents drop by the office expecting us to get them a Capitol tour right then.

Sometimes, those people would be told there was nothing we could do for them, but when possible we tried to accommodate them by getting an intern or a low-level staffer to conduct an unofficial tour. And I can't speak for what others did, but the tours I gave were pretty comprehensive. A typical tour went like this:

By contrast, my sister's tour visited the Crypt, the Rotunda, and the Statuary Hall. In fairness to the official guides, they have a lot more people to deal with, and security at the Capitol is a lot tighter now than it was twenty years ago when I worked for Sen. Riegle, but I'll bet my tours were more comprehensive than the official ones even back then. I mean, there's no way you could get a large group of people down to see the tomb or even the Old Supreme Court Chamber, and having huge groups filing in and out of the visitors galleries would be really distracting when something was happening in the chambers, and really boring when nothing was, which is most of the time.