There's a lot of chatter on the Internet and elsewhere today about the 19th amendment to United States Constitution, which took effect on this date in 1920, giving women the right to vote nationwide. (Women had been allowed to vote in some states as early as 1890.) In the New York Times, Gail Collins observed that the anniversary offers an opportunity both to look back at how much has been accomplished in terms of equality since 1920 and forward to how much remains to be done.

The one thought feeds the other. The idea of having 50 women in the U.S. Senate, or 250 female C.E.O.’s [sic] in the Fortune 500 seems less far-reaching if you contemplate the fact that in the 1960s, a spokesman for NASA said 'talk of an American spacewoman makes me sick to my stomach.' Now, one of the two American astronauts on the International Space Station is a woman, and that is so routine that we’re not even aware of her name. (It’s Karen Nyberg.)

Reading that inspired me to look back and remind myself of how many women served in the Senate when I started working there in 1992. The answer: two. 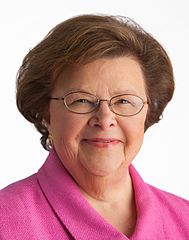 Nancy Landon Kassebaum (R-Kansas) and Barbara A. Mikulski (D-Maryland) were the only women serving in the Senate in January of 1992. That was only the tenth time there had been a pair of women serving together in the Senate, and only the fifth time both had been elected to the office. There had never been more than two serving simultaneously up to that point.

As it happens, they were the last single pair of women to serve together in the U.S. Senate, because 1992 turned out to be the year the dam broke. In September, Jocelyn Burdick was appointed to finish out her husband Quentin's term. In November, four more women -- Barbara Boxer, Dianne Feinstein, Carol Moseley Braun, and Patty Murray -- were elected to the Senate. Since then, there's been at least one woman elected to the Senate in every election year, and as of today there are 20 female U.S. Senators.

Looking back, it's sort of hard to believe that as late as 1992, the Senate was still 98% male. Going from 2% to 20%, that's pretty good! On the other hand, women comprise 50.8% of the U.S. population, so obviously there's quite a way to go before the Senate achieves true equality of representation. But I have hope that in 21 years, today's new Senate staffer will look back and find it hard to believe that as recently as 2013 there were only 20 female Senators.