Most of us have a set of stock phrases we use all the time. Sometimes they're original; sometimes they're things you picked up from someone else; and oftentimes they're quotations from TV shows, books, or movies. For example, when I come into a small amount of money, like a penny on the floor, or my first paycheck from the calendar store, which was for just one week of work, I will often say, "Now I can go to college!"

This falls into the third category of catchphrase, but I doubt anyone realizes it, because the source so obscure I know of only one other person who's read it. It's from a 1980 book called Junk Food, which in 2004 I described thusly:

... a very strange volume written and compiled by Charles J. Rubin, David Rollert, John Farago, Rick Stark, and Jonathan Etra. For the most part, it's a relatively straightforward collection of essays, cartoons, interviews, and photographs paying tribute to and gently mocking American junk food. But starting about halfway through the book, you start seeing references to and mock advertisements for the 1983 World's Fair, the Century O' Progress. (The book was published in 1980, incidentally.) Then things get really bizarre. First, there are twenty-four pages "reproduced" from the Century O' Progress Guidebook. And it ends with a five-page comic about a nuclear accident that results in the state of Illinois being blasted into the stratosphere. It's completely twisted, but wonderfully so.

One of the cartoons is a one-pager by Elwood H. Smith called "Duller Bill and his Wunnerful Lemming Id." As with many of the things in the book, it's rather peculiar, featuring misshapen characters, one of who has a prehensile tail, and bizarre, pidgin English that changes from panel to panel. Here's the relevant panel: 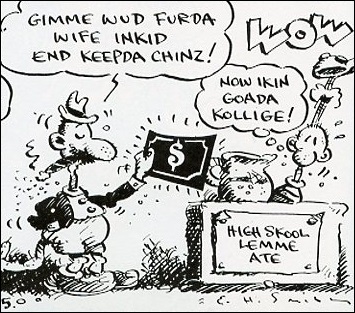 You can't really tell what's going on just from that one panel, so you should read the whole thing for context.

The question is, why has that stuck with me all these years? It's a mystery to me.