Albrecht Dürer
A Young Hare, 1502
Watercolour and gouache on paper 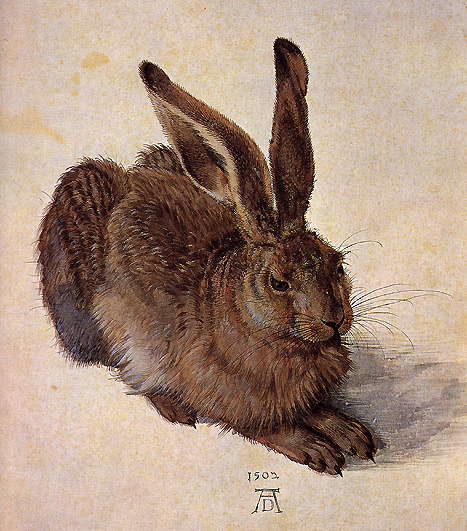 Happy Easter! It is of course well known that this is the official portrait of the Easter Bunny, commissioned by Mrs. Bunny as an anniversary present. But what few people realize is that it's actually a recreation of the original painting, which was damaged when Jan Bunny ran into it with her bike because she wasn't wearing her glasses.

There was a reproduction of this work hanging in the third-grade hallway at the elementary school I attended. I used to think that the AD at the bottom stood for "anno domini." I mean, it's right there under the date, so what else could it have meant? Yeah, it was a little strange that it was so large in comparison to the date, but you know how artists are. It wasn't until many, many years later that I realized that the AD was the artist's monogram. Ah, the foibles of youth.

At the fellowship breakfast following the Sunrise Service this morning, my friend Jeff noticed me doodling on my napkin. He challenged me to do something more productive, like "finish the J. K. Rowling series." So I did. Here it is, in its entirety:

Thanks for all the birthday wishes! They were certainly much appreciated.
Collapse