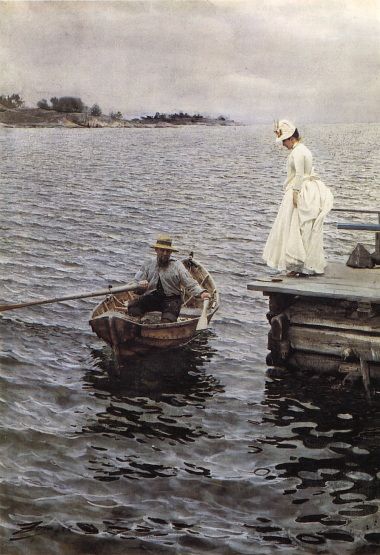 amyjtoo requested Sweden, so here's a painting of two Swedish people in Sweden (the Stockholm archipeligo, specifically) by a Swedish painter. And here's a little more Swedishy goodness: 30-års jiggen, a peppy instrumental by the Swedish folk group Väsen.

I noted the other day that the Wizard of the Month feature over at jkrowling.com gives the wrong date for Albus Dumbledore's death. I have since learned that other Harry Potter fans are taking issue (spoilers in the comments) with the date given for his birth, because it contradicts the date they -- the fans, that is -- had made up for use in fan fiction. To be fair, their date was based on statements made by J.K. Rowling in a couple of different interviews, in which she stated that Dumbledore was 150. But it would seem Rowling changed her mind somewhere along the way, since the information presented in Harry Potter and the Deathly Hallows about Dumbledore's life is consistent with the birthdate listed on jkrowling.com, not the fanon date. Some fans believe that Rowling deliberately changed Dumbledore's age to "stick it to the fans" --

ellid: "I really believe it." -- but that's just another example of how Harry Potter fans are absolutely freaking insane.
Collapse