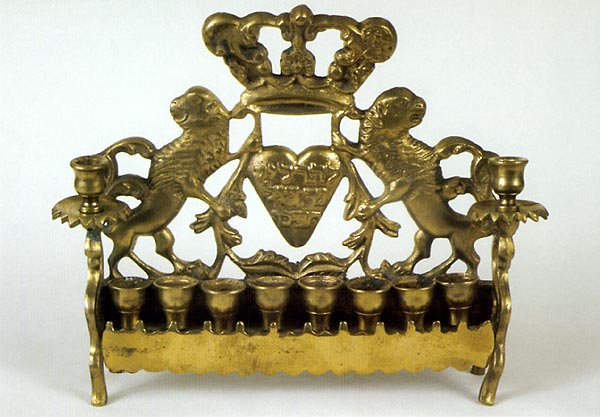 Today's work of art comes from the Commonwealth of Virginia, which is not exactly the first place that springs to my mind as a center of Jewish life and culture. Nevertheless, this is a right purty hanukkiah.

Tonight is the first night of Hanukkah, the Festival of Lights. You know the story: there was only enough consecrated olive oil to fuel the eternal flame in the Temple for one day, but miraculously, it lasted eight days, long enough for a fresh supply of consecrated oil to be prepared. Unlike traditional menorahs, which hold seven candles, Hanukkah menorahs hold nine candles, eight for the eight nights of the festival and one, the shamash, used to light the others. This particular hanukkiah appears to hold ten candles. That's just the way we roll here in the Old Dominion.

Hey, speaking of Jewish life and culture, did anyone else read the All-of-a-Kind Family books? Most of what I know about Judaism I learned from those books. I also learned you can hide a tea stain on white drapes by brewing a lot more tea and using it to dye the drapes.