Gah, so busy. Why aren't you people home sleeping it off or watching football or something?

Anonymous German or Flemish artist (active 14th century)
Panel from a Diptych Showing the Adoration of the Magi, third quarter of the fourteenth century
Ivory 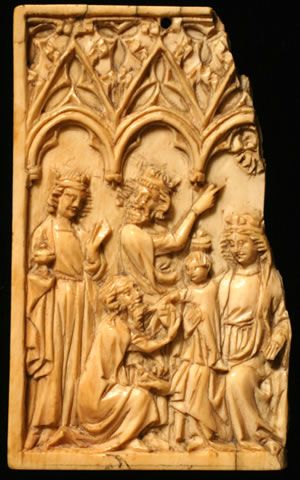 In previous years on January 1, I've posted something having to do with New Year's Day. But really, why should I? New Year's Day is the lamest of all holidays, and I like to think of myself as something of an expert on lame holidays. After all, I grew up in a state that celebrates Casimir Pulaski Day, and am a current resident of a state that celebrates the birth and life of two men who renounced their solemn oaths to protect and defend their native country and took up arms against that country in defense of a government that granted the same level of protection to the ownership of human slaves as to freedom of speech. So trust me when I say that New Year's Day is lame, lame, lame. Also, the only good work of New Year's Day-related art I could find in the states and nations yet to be featured was a duplicate of the work of art I posted on New Year's Day 2005.

So, onto the Magi, whose visit on January 6 marks the end of this project. This work is from Missouri, a state I've visited many times, including a fun trip to Branson beck before it was Branson, if you know what I mean. I don't remember much of that trip other than an excursion boat tour on Table Rock Lake and a visit to Silver Dollar City. My brother and I still make periodic references to the Flooded Mine ride.
Collapse