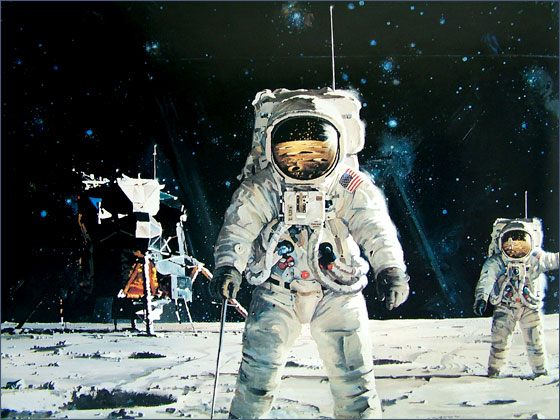 July 20, 2009 is the 40th anniversary of Apollo 11 lunar landing. Which is tomorrow, not today, but there is one particular aspect of the Apollo 11 mission that is always celebrated on the Sunday closest to the anniversary of the lunar landing. Buzz Aldrin was a member of Webster Presbyterian Church and an ordained elder, and he asked pastor to prepare a communion kit that could be taken into space with him. On July 20, after the LM had touched down but before he and Neil Armstrong stepped onto the surface of the moon, Aldrin celebrated Holy Communion privately, as related in this passage from The Little White Church on NASA Road 1, From Rice Farmers to Astronauts, a Centennial History, 1893-1993:

Now Neil and I were sitting inside Eagle, while Mike circled in lunar orbit, unseen in the black sky above us. In a little while, after our scheduled meal period, Neil would give the signal to step down the ladder onto the powdery surface of the moon. So I unstowed the elements in their flight packets. I put them and the scripture reading on the little table in front of the abort guidance system computer.

Then I called back to Houston.

"Houston, this is Eagle. This is the LM Pilot speaking. I would like to request a few moments of silence. I would like to invite each person listening in, wherever and whomever he may be, to contemplate for a moment the events of the past few hours and to give thanks in his own individual way."

For me this meant taking communion. In the radio blackout I opened the little plastic packages which contained bread and wine.

I poured the wine into the chalice our church had given me. In the one-sixth gravity of the moon, the wine curled slowly and gracefully up the side of the cup. It was interesting to think that the very first liquid ever poured on the moon, and the first food eaten there, were communion elements.

And so, just before I partook of the elements, I read the words which I had chosen to indicate our trust that as man probes into space we are in fact acting in Christ.

I sensed especially strongly my unity with our church back home, and with the Church everywhere.

I read: "I am the vine, you are the branches. Whoever remains in me, and I in him, will bear much fruit; for you can do nothing without me."

Upon returning to Earth, Aldrin returned the Communion chalice to Webster Presbyterian, and every year they use it in a special Lunar Communion Service, celebrated on the Sunday closest to July 20.
Collapse