Yesterday morning was a bit on the cold and rainy side... a good day to make soup! Two kinds of soup, actually. The first was one of my old standbys, Chicken and Mushroom Chowder. Instead of the 3 cups of chicken broth and ½ cup of water called for in the recipe, I just use two full cans of low-sodium broth, which works out about the same.

My second soup was Slow Cook Taco Soup. I used ¾ pound of ground beef instead of a full pound.¹ Also, I don't like olives, so I didn't put those in. Because I forgot to buy tomato juice when I was at the supermarket and my corner market didn't have any,² I used the liquid from a can of whole tomatoes. And then because I didn't have anything better to do with them, I mashed up the tomatoes and added them to the pot as well. The verdict: pretty good. It's more like chili than a taco, but whatever.

That I made the latter soup was kind of an accident. A week ago or so, I found a recipe for a taco soup, and had written down and bought the necessary ingredients. But when I went to find the recipe again, it didn't match the ingredients I had. That did not deter me; I assumed I had neglected to write down the things I had not purchased. And I was certain it was the right recipe, because the advanced ingredient search showed only one recipe that called for both a packet of ranch dressing mix and of taco seasoning. Anyway, this afternoon as I was eating a bowl of the slow cooker taco soup for lunch, I was leafing through a cookbook and, lo and behold, there was the taco soup recipe I had originally planned to make. Oops. A project for another rainy day, I guess.

¹ Acting on a tip from Melissa d'Arabian, I divided a big six-pound pack of ground beef into eight ¾ packets before freezing it. You don't notice the missing 4 oz. and it makes the meat last a third longer.

² But they did have lychee juice, which struck me as rather odd. 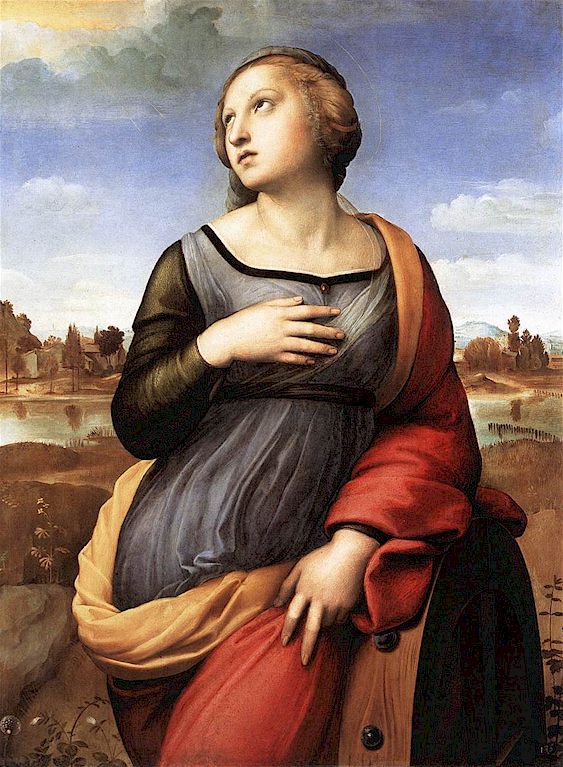 This woman looks more like someone from Alexandria, Virginia, than Alexandria, Egypt, but who am I to criticize a genius like Raphael?

Incidentally, if you are reading this, St. Catherine is probably your patron saint. She is the patron of teachers, unmarried women, lawyers, librarians, nurses, students, and scholars -- more than half of the people on my LJ friends lists falls into one or more of those categories.

How good is Google? I edited a Wikipedia page, and Google picked up the change less than ten minutes later. Impressive.
Collapse