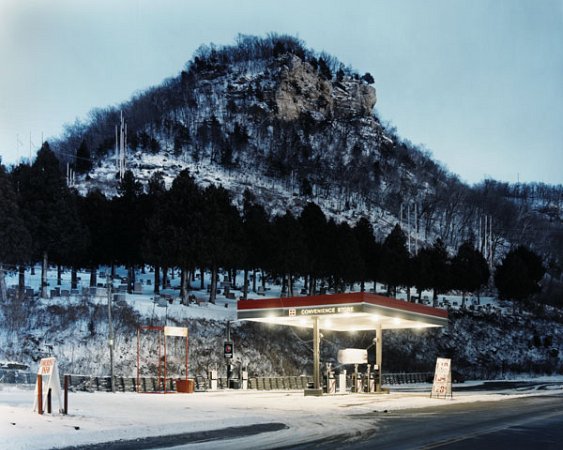 This is yet another, but perhaps not the last, of the works I saw displayed at the Madison Museum of Contemporary Art when I visited there last month. If you're interested in seeing other works from Soth's Sleeping by the Mississippi series, the artist has made a great many of them available on his website.

As most of you are aware, I've been out of work since last May, when the store I worked at went out of business. Well, I had the snowplowing gig, but we haven't had any snow here since February 12, so I'm unemployed from that too.

However! Last Friday, I was offered a job, and I accepted! I'm still technically unemployed, because I don't start until March 29, but hey, close enough! But that is not the only exciting news! The job is in Madison, Wisconsin, so after 18 years in the DC area I will be moving back to the Midwest! Whee!

So, about the job. It's with the State Department of Agriculture, Trade, and Consumer Protection, in the Division of Animal Health. It's more policy-oriented than any job I've had before, but one that I think will be very interesting. One of the things the Animal Welfare Division does is track incidents of Chronic Wasting Disease, which is sort of like mad cow disease, only with deer instead of cattle. (Technically, it's a spongiform encephalopathy. Say that five times fast!) In my position, I'll be writing final epidemiological reports for CWD events based on existing documentation. I'll also be developing standards and templates for future epidemiological reports and documentation for the entire Animal Health division. I think it sounds pretty interesting! It's sort of a departure for me; I did a bit of policy work when I worked for Senator Riegle, but since then it's all been either computer jobs or retail. But I'm ready for a new challenge.

One of the requirements of the job is that I be a resident of the state of Wisconsin. You don't need to have been have been a resident for long—just ten days. Still, that doesn't leave much time to pack everything. Luckily, I don't own very much stuff, so by this time next week I'll be on my way to Wisconsin, accompanied by my dad, who's flying out to help me load the van and keep me company on the way. It'll be a busy week, but worth it. And with help from my sister, who also lives and works in Madison, I've already lined up a place to live, in what I'm told is a nice neighborhood with some interesting shops and restaurants nearby, and just five blocks from Lake Monona. Everything's coming up JHeaton!
Collapse