I mentioned a few weeks ago that I'd been hired to work as an usher for the local semi-pro baseball team this summer. This past Thursday, May 20, I went out to the stadium for orientation, which should have been a simple matter of hopping on the bus and taking it up to Warner Park. But last week I got a letter in the mail from the City of Madison, about a position I'd applied for with the city. It was another part-time job, working in the gift shop at Monona Terrace Convention Center. (Your local convention center may not have a gift shop, but your local convention center probably wasn't designed by Frank Lloyd Wright.) I had applied for it just a few days after applying for the baseball job, with the expectation that I could do it on the weekends or after work, but I had since sort of written if off after learning the gift shop closed at 5 PM. (Which surprised me, because they have nighttime events there all the time, and you might think that some of those people might like to get a souvenir while they're there.) But evidentially they had not written me off, because they wanted me to sit for a written exam as part of the selection process. And they wanted me to do so on May 20.

So the question was, could I do both? One thing working in my favor was that the exam would be held not downtown but on the northeast side of town. Had it been at Monona Terrace or the city building, both of which are downtown, I doubt I could have done both. But having determined that doing both wasn't out of the question, I set to investigating how it might happen. Getting to the exam site was simple enough, though it would require me leaving work about fifteen minutes early, a sacrifice I was willing to make. But could I then get to the ballpark in time for my appointment there? That looked like a dicier proposition. Unless I could finish the test in less than 45 minutes, any bus route would have gotten me to the stop closest to the stadium five minutes after I was supposed to be there, with the stadium itself another five to ten minutes away on foot. So that wasn't promising. I looked into the idea of calling a cab, but as I looked at the route on Google Maps (which I had called up to get a rough sense of what the fare might be, it occurred to me that the test site and the park were not that far apart. Close enough, perhaps, to make the trip on my bike. I knew the distance, about four miles, wouldn't be a problem, but could I do it in less than 30 minutes? Good question. Obviously, an experiment was called for.

On Tuesday after work, I rode the bus home, grabbed my bike, and headed over to the East Transfer Point to catch the bus to the test site. I got there, conveniently enough, just a couple of minutes before six, making timekeeping easy. At 6:00, I pushed off on a route that would take me past the new Hy-Vee, Madison Area Technical College, Dane County Regional Airport, and Smoky Jon's, which claims to have the best barbecue in Madison. I rode at a steady clip, going about my normal speed, and soon enough found myself pulling in to the bike parking area in front of the stadium. Elapsed time: 23 minutes (which works out to about 10.4 miles per hour; not too impressive, but good enough). Success! There was a high school baseball game going on at the stadium when I got there—the LaFollette Lancers v. the Middleton Cardinals—so I sat down and watched the game for a half-hour or so before heading home on the bus.

On Thursday, things proceeded according to plan. I took my bike with me on the bus to work in the morning, and in the afternoon to the test site, which turned out to be the east side location of the Madison Streets department. Why was a test for a position at the convention center held at the streets department? Beats me, but it worked in my favor so I don't care. The test was not particularly difficult, and I finished up in about an hour, giving me about fifty minutes to get to the park. No problem!

(A brief aside about the test. Most of it was pretty straightforward: questions about how to respond in certain situations, a bit of basic arithmetic, some change-making questions, that sort of thing. But the last section was something I'd never seen before, a set of math/logic problems designed to test your ability to follow complex directions. We were given a series of 4x4 grids filled with numbers. Each grid had one number missing, and one number that was wrong, and we had to identify the number that needed to be swapped into the grid to make everything add up correctly. For example:

In the above example, the correct answer is 12, because the number that is incorrect is 13. Proportionally speaking, this was the most time-consuming part of the test.)

Anyway, I made it to Warner Park without incident. I even had time to stop at a PDQ to get a little snack and refill my water bottle. The orientation was uneventful; they had us fill out our W-4s and I-9s and whatnot, went over the dress code and code of conduct, took us on a tour of the ballpark, and handed out the official staff shirts, which are the most outrageous shade of fluorescent yellow you can imagine. Good thing I'm not in it for the clothes. First game is June 2, which will give me ample time to get the khaki shorts and sneakers required by the dress code.

Here are some links for your edification or amusement!

Wolverine short story pitch by Faith Erin Hicks
A great Wolverine story, or the greatest Wolverine story?
'L&O' Veteran Rene Balcer To Run 'LOLA'
This is excellent news! The mothership really declined in quality after Balcer left in 2001 to run L&O: Criminal Intent, and really improved once he came back in the 18th season. I have high hopes for the new series.
The Wrong Euro-Villains
I'm linking to this blog post just because the photo Chait used to illustrate it made me laugh. (Though the Steven Pearlstein column to which Chait links in the post is worth reading too.)
Gulf oil spill: Kevin Costner donates 'Ocean Therapy' invention to clean oil from sea; BP OK's tests
This is about the least likely development imaginable in the ongoing oil spill crisis. I mean, Kevin Costner? Still, let's hope it works.
Sex Lives of Supreme Court Justices
Michael Kinsley raises some amusing questions about Justice Scalia and his embrace of a lifestyle that lies far outside the American mainstream. I don't think Kinsley is as strong a columnist now as when he wrote for The New Republic back in the 80s, but on occasion he can still knock one out of the park.
Nippon Fanifesto! A Tribute to DIY Manga
This illustrated essay about doujinshi, fan-created, commercially sold comics featuring corporate-owned characters from manga, anime, or other media, is a fascinating look at a fan subculture that would be sued out of existence if attempted in the United States.
The 10 Most Common Grammar Mistakes – And Simple Rules To Avoid Them
Some good tips in here! For writers of Harry Potter fan fiction, I would add that Harry's scar is not "lightening," unless your story is about the scar gradually fading away.
A Little Austen Update
Like Ms. Beaton, I am not sure what to make of the Austen culture. It boggles the mind that there is such a huge demand for Austen pastiches. The Republic of Pemberly has a list of more than sixty, which doesn't include any of the forty such books published by Sourcebooks, Inc.
My World is a Little Darker... Martin Gardner has died.
Sad news! Gardner was responsible for one of my most favorite books, The Annotated Alice, a extensively footnoted edition of Alice's Adventures in Wonderland and Through the Looking-Glass, explaining the many contemporary references, mathematical concepts, wordplay, and Victorian traditions that would otherwise go over the head of the average reader.
The Facts In The Case Of Dr. Andrew Wakefield
Everything you need to know about the link between vaccines and autism can be found in this illustrated essay.
Sen. Ron Wyden: When party trumps country
Elections may be zero-sum games, but legislating need not be. 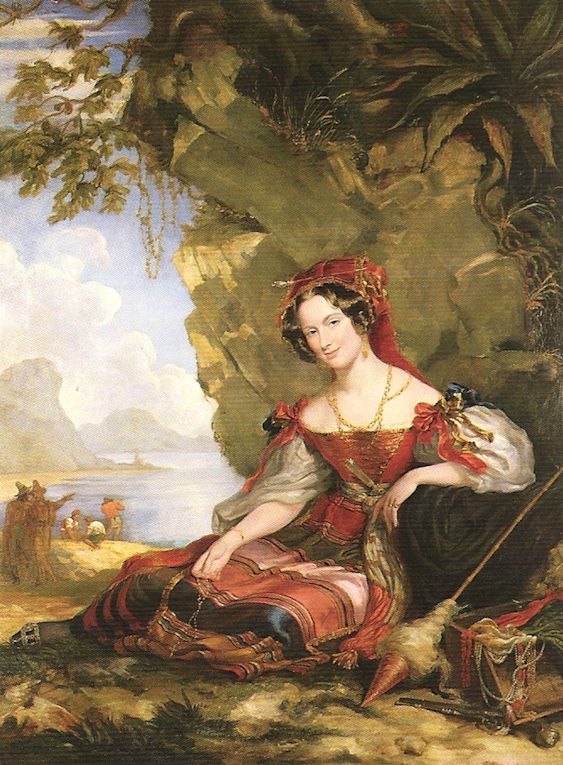 This is a particularly impressive painting to see in real life; it's more six feet tall and nearly five feet wide. And it's doesn't have weird horizontal lines across it, as it appears to here. If I had a better scanner or more sophisticated image editing software, I might have been able to eliminate that effect, but it was not to be. Alas.