under_crisis demanded it, my (very) modest contribution to the blanket fic genre.

One of the traditional symbols of Advent is the Advent wreath. An Advent wreath is superficially similar to the kind of wreath you might hang on your door this time of year, in that it consists largely off pine boughs arranged in a circle, but instead of hanging vertically, it lies horizontally. The other things that set an Advent wreath apart from a regular Christmas wreaths are candles. Four of them, rising from the wreath. In the Presbyterian churches I've attended, there are three purple candles and one rose. Other denominations use all purple, or just plain white. Some churches, including mine, add a fifth candle, a white one, in the center of the wreath, representing Christ. On the first Sunday in Advent, one candle is lit; on the second, two; and so on. If one of the candles is rose, that one is lit on the third Sunday. The Christ candle, if there is one, is lit on Christmas Eve.

Anyway, the point of all this is that last night, my sister, my nephew, and I made an Advent wreath! Last Sunday, which is to say two Sundays ago, my sister came to my church to hear me make my debut as part of the Christ Presbyterian bell choir. There was an announcement in the bulletin about an Advent wreath-making event that would be held the following Sunday, i.e. yesterday. She's not normally a church-goer, but she thought it would be something my nephew would enjoy.

And, she was right! We pretty much gave him free rein to do whatever he liked with it, so he picked out the decorations, trimmed the pine boughs, and situated them where he wanted. (Rather than trying to bind large boughs together into a ring, which would have been difficult for the kids, we used those highly absorbent green foam blocks, and had the kids cut smaller branches of the large boughs and stick them into the foam. Plus, these will last longer than a "real" wreath, because they can be kept watered.) And this is what we ended up with: 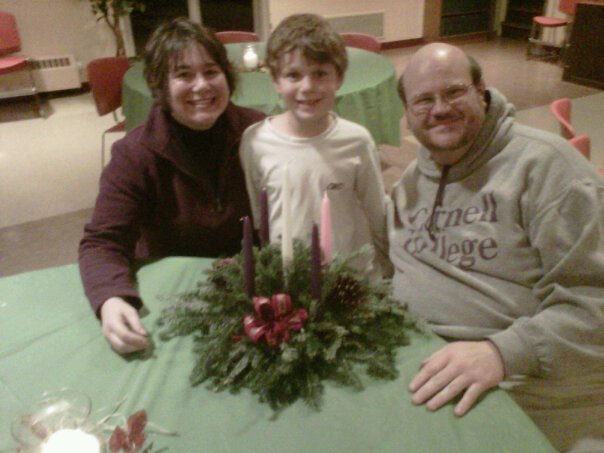 I like it! It's perhaps a little taller and more mound-shaped than a traditional advent wreath, but that's a function of the size of the green foam block we used as a base. MJ wanted to hide as much it as possible. And see that bow, and the pine cones? I attached those. After being told where to put them, of course. Like I said, MJ was running the show. That being the case, it went home with him and my sister. Just as well; I probably would have forgotten to keep it watered.

Domenico Ghirlandaio (1449-1494) and workshop
Apparition of the Angel to Zechariah, 1490
Fresco 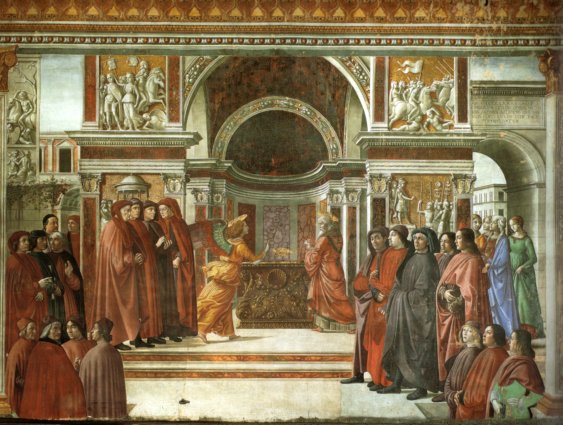 So yesterday I said that some people would say that the Nativity story starts before the Annunciation, and for them this is the event with which it starts. From the Gospel of Luke, chapter 1, verses 5-17 (New Living Translation):

When Herod was king of Judea, there was a Jewish priest named Zechariah. He was a member of the priestly order of Abijah, and his wife, Elizabeth, was also from the priestly line of Aaron. Zechariah and Elizabeth were righteous in God’s eyes, careful to obey all of the Lord’s commandments and regulations. They had no children because Elizabeth was unable to conceive, and they were both very old.

One day Zechariah was serving God in the Temple, for his order was on duty that week. As was the custom of the priests, he was chosen by lot to enter the sanctuary of the Lord and burn incense. While the incense was being burned, a great crowd stood outside, praying.

While Zechariah was in the sanctuary, an angel of the Lord appeared to him, standing to the right of the incense altar. Zechariah was shaken and overwhelmed with fear when he saw him. But the angel said, “Don’t be afraid, Zechariah! God has heard your prayer. Your wife, Elizabeth, will give you a son, and you are to name him John. You will have great joy and gladness, and many will rejoice at his birth, for he will be great in the eyes of the Lord. He must never touch wine or other alcoholic drinks. He will be filled with the Holy Spirit, even before his birth. And he will turn many Israelites to the Lord their God. He will be a man with the spirit and power of Elijah. He will prepare the people for the coming of the Lord. He will turn the hearts of the fathers to their children, and he will cause those who are rebellious to accept the wisdom of the godly.”

Obviously this doesn't have anything to do with the birth of Jesus in and of itself. But the child who would be named John would later be known as John the Baptist, who foretold the coming of the Christ to his own followers in Judea and later baptistery Jesus in the River Jordan. (They were also distant cousins, and per Luke had sort of met each other once before the baptism ... but more about that later.)

This painting is enormously large--if the source I found is accurate and the proportions of the digital image true to the original, it's almost 15 feet wide and nearly 11 feet tall--so I've placed a close up of the angel and Zechariah behind the cut.

The close-up lets you get a better look at the fine detail that went into the painting, particularly the elaborately carved altar and capitals (which almost certainly look nothing at all like the temple in Jerusalem would have looked, but never mind) and the faces of the men (notable citizens of Florence) standing to the left and right of the central figures. It's interesting to compare the idealized, almost stylized features of the angel to the more realistic faces of the other men, who are in fact real people. If you want to take a closer look at the whole thing, you can do so here.