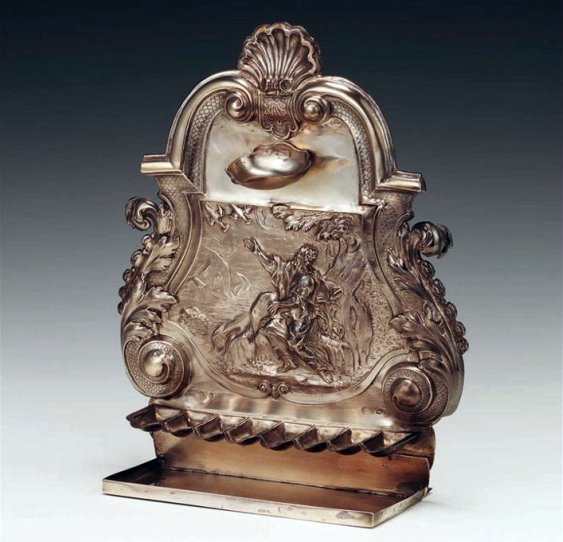 If all goes according to plan, it's 3:55 PM in the United Kingdom and the sun has just set over the Royal Observatory in Greenwich, marking the start of what I like to call Universal Coordinated Hanukkah. Or Hanukah, as the fine folks at the London Jewish Museum seem to call it. Regardless how you choose to spell it: Happy Hanukkah!

What you see above is the Lindo lamp, the earliest known English Hanukkah lamp, created in 1709 by silversmith John Ruslen for the marriage of Elias Lindo, a prominent member of the Iberian Jewish community in London, to Rachel Lopes Ferreira. The image depicted on the lamps is that of the prophet Elijah being fed by ravens in the wilderness. (A story that can be found in 1 Kings 17: "Then the word of the LORD came to Elijah: 'Leave here, turn eastward and hide in the Kerith Ravine, east of the Jordan. You will drink from the brook, and I have directed the ravens to supply you with food there.' So he did what the LORD had told him. He went to the Kerith Ravine, east of the Jordan, and stayed there. The ravens brought him bread and meat in the morning and bread and meat in the evening, and he drank from the brook.")

Strictly speaking, the Lindo lamp is not part of the collection of the London Jewish Museum; it has been on loan to the museum by the family that owns it since the 1930s. Last year, the owners announced that they wanted to sell it, and set a price of £300,000 for the museum. Last I heard, they were working to raise the last £50,000 they need to buy it.

This year, I neglected to do two things I have done in years past when making a Hanukkah-themed post: 1 didn't explain what Hanukkah was, and I didn't provide links to my previous Hanukkah posts. This fabulous video by Dave Campbell of the sorely missed blogs Dave's Long Box and the Society for the Advancement of Dave will tell you everything you need to know:

As for the other one, here are my previous Hanukkah posts:

You may ask, why did you spell it differently in 2004? Well, for the same reason I spelled it differently this year: because that's how it was spelled by the person who created the media I was featuring that year. A better question: why didn't I do a Hanukkah post in 2003, the first year I did an Advent project? I haven't any idea.

And speaking of alternate spellings, consider this Tweet I made when I posted a link to today's Advent Art post:

Yeah. Apparently I'm like that University of Nebraska football player who thought the N on his helmet stood for "knowledge."
Collapse