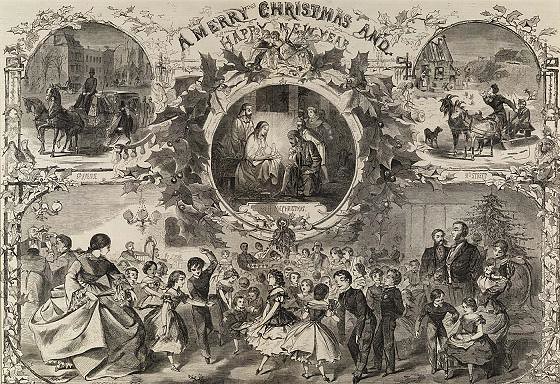 I don't know if this is what Christmas was really like for (upper class, white, northeastern, urban) Americans in the 1850s and 1860s, or if it just represents what Winslow Homer thought it should be like, but regardless, this is typical of the seasonal engravings for Harper's during those years. Sleigh rides, elegant parties, top hats and fur muffs, and so on. This one is somewhat unusual in that it incorporates some religious symbology at the center; most of his engravings were quite secular.

On a trip to Chicago earlier this year, I picked up some remaindered holiday cards at the Art Institute of Chicago gift shop. A lot of cards. So: who wants a card? If you're interested, post your name and address in the comments; they're screened, so no one will see it but me. (Go ahead and leave your address even if you think I already have it; earlier this year, I learned the address I had for

escap1974 was two addresses old.) And don't delay! Only 19 days to Christmas!
Collapse