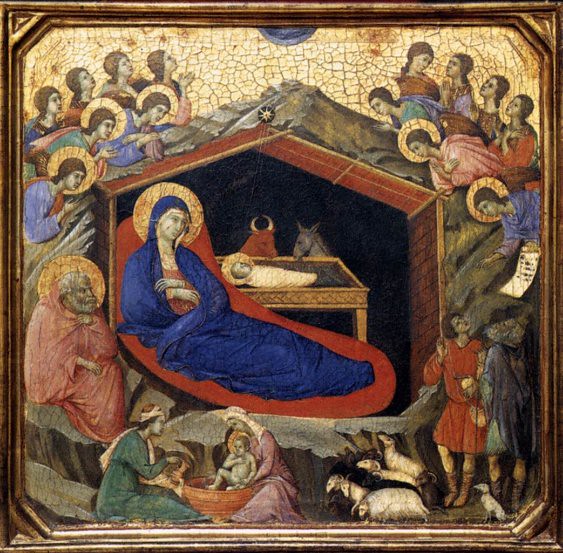 Back in 2004, when I first did an Advent art project, I commented that I could easily fill the entire season with religious art from the collection of the National Gallery of Art. I am constantly amazed by the depth of their collection; I don't ever remember seeing this piece, either in person on one of my many visits to the National Gallery, nor among the collection online back in 2004, when I think I literally looked at every work on the NGA website that contained the word nativity in the title. (All the works featured that year were from the collection of a Washington DC museum.) Of course, it's entirely possible I saw it and just forgot; I looked at a lot of art when preparing for that project.

Anyway! This is a nice piece. You may be wondering which of the figures in the painting are Isaiah and Ezekiel; the answer is none of them. This is the center panel of a triptych; if you look at the whole thing (which you can, by following that link), you'd see Isaiah on the left and Ezekiel on the right. Or maybe the other way around! The NGA web site doesn't make clear which one is which. I'm just assuming that name that comes first is the one on the left, since as a westerner I'm trained to interpret information from left to right. Duccio was Italian, so he was probably the same way; on the other hand, this is in the Byzantine style, which is more of an eastern tradition, so who knows. Also, who cares?