I was so busy looking at the happy donkey in yesterday's painting, I completely missed the second baby: 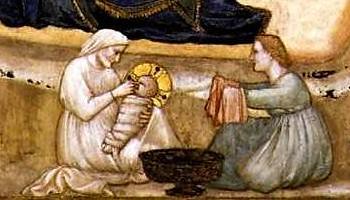 kaitzi was the one who brought it to my attention, asking "Did Mary have twins?" My first thought was that perhaps it was Elizabeth holding the infant John the Baptist, but when I looked closer, I saw that the second baby had a halo with a cross, which clearly marked him as Jesus. (The halo with a cross was a common motif in Byzantine depictions of Jesus, so it makes sense that Giotto would use it in this work, which is very much in the Byzantine tradition.) So I told him I'd look into it, and after a little digging I turned up this passage in a long essay (unattributed, alas, but supposedly out of copyright) about Giotto's work:

Below the shelf of rock on which the Virgin's bed is laid, Giotto
has, according to the custom of the time, represented another
episode of the scene; two women, very lifelike in action and
expression, are engaged in washing and swaddling the Divine
Infant.

So there you go. There are two Jesuses because that was the custom of the time. The question that now occurs to me is, who are the women? Did Mary have au pairs? 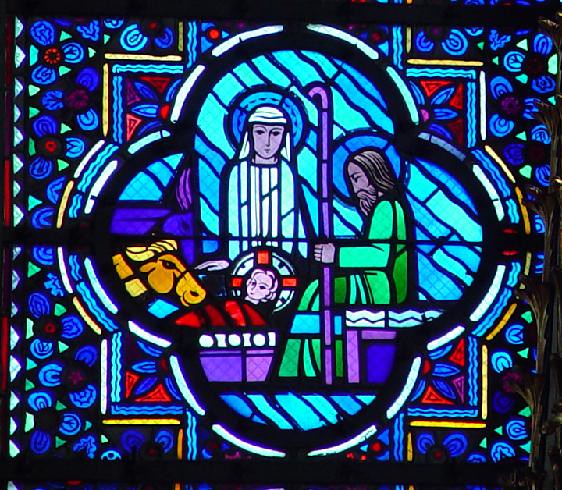 When I first saw this, I thought it uncommonly modern-looking for a piece of stained glass in a cathedral in Europe. Turns out that's because it was created a mere 77 years ago. Younger than my dad! It's just that when I think of European cathedrals, I don't think "20th century." Indeed, the cathedral itself dates to the 13th century. (Though of course like any cathedral it's always a work in progress to a certain extent.)