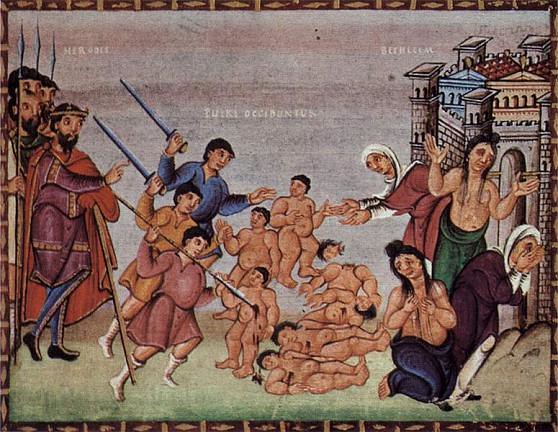 Speaking of thinking of the children, today is the date on which the Eastern Orthodox Church observes the Feast of the Holy Innocents, which commemorates the massacre of every male child 2 years of age or younger in Bethlehem. Here's what the Bible says about this particularly grim part of the Nativity story, in the Gospel of Matthew, chapter 2, verse 16:

Herod was furious when he realized that the wise men had outwitted him. He sent soldiers to kill all the boys in and around Bethlehem who were two years old and under, based on the wise men’s report of the star’s first appearance.

Herod's brutality resulted in the deaths of somewhere between zero (according to those who say it never happened) and 144,000 (according to Coptic tradition) children. Assuming it happened at all, and there's no historical evidence to say it did (though certainly such an action would not be out of character for Herod, who was well known for his brutality), the best guess is that between six and twenty children were killed in Bethlehem and another dozen or so in the surrounding areas.

The whole two years or younger thing has always sort of confused me. Did the star appear to the Magi two years before Jesus was born? Did they show up when Jesus was two years old? If so, why was the Holy Family still in Bethlehem if they had only traveled there from their home in Nazareth for the census? It's all very mysterious.