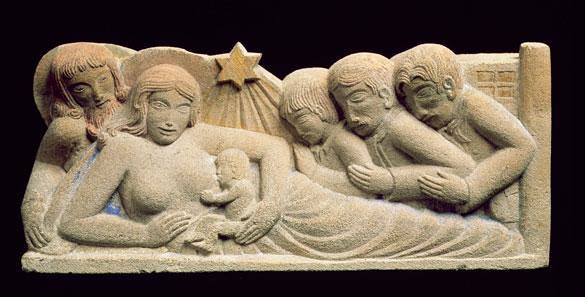 I previously considered other works by Eric Gill for this project, but this one spoke to me in a way the others didn't. It took me a while to track it down, and I still don't exactly know where it is in a geographical sense. My best guess is that that Sir Christopher lives in London, but I can't prove it.

Interesting guy, by the way. Not bland in the slightest, actually. He was on the Irish Olympic Fencing team in Rome in 1960; chaired the Board of Governors of the BBC for five years, during which he oversaw the creation of BBC Online; chaired the Hammersmith and Queen Charlotte's Hospitals Special Health Authority and the Hammersmith Hospitals NHS Trust (which is what got him knighted); chaired British Telecom for six years; and currently is chairman of the Royal Shakespeare Company. And in his spare time he collects art by Eric Gill.