Whoops, didn't get around to putting up a Christmas card yesterday! I had a Christmas party in the evening, and when I got home I had to finish up the review roundup of last night's episode of Community, which took quite a lot longer than it has when I've done it in the past. Since it was an online fandom activity that caused me to forget to post a card yesterday, I decided that one of the two cards I post today should be one from someone I met through online fandom.

I received this card my friend Lori, whom I met first a CJoff in the AOL TV Gossip area, where we both posted on a bulletin board devoted to discussing Melrose Place. The original one, I mean, not the recent (and terrible) remake, so I've known her for a good few years now. Almost 20 years, in fact! That seems like a mind-bogglingly long time to have known someone I first met online. A lot of my fellow Community fans are in their early 20s, and from time to time I will receive a rude age-related shock, as when the other day someone referred to A Bug's Life--which was released the year I turned 30--as a childhood favorite. I don't think it's happened quite yet, but if I stay active in television fandom--and why wouldn't I?--it won't be too very long before I will have been involved in online fandom longer than some of my fellow fans have been alive. Oy. 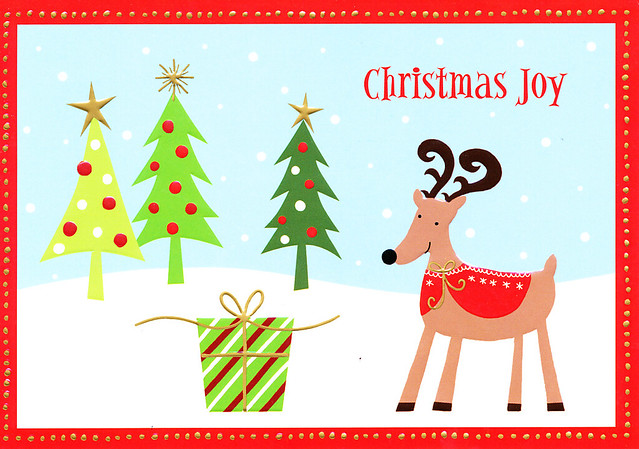 I found this card among my correspondence, but I have no idea where it came from. There's no signature inside, just a Creative Channel Services logo and slogan. I don't remember anyone sending to me, but I can't imagine where else it would have come from. One of the many mysteries of Christmas, I guess.

(ETA: Wait, no, I think I remember! When I worked at Ritz, we had these online training modules we had to take. I think maybe Creative Channel Services is the company that made and hosted those training modules. Hold on a sec ... yes! "Creative Channel Services (CCS) is a leading retail marketing agency providing integrated solutions that increase brand sales and profitability for manufacturers and retailers." Mystery solved!)

Another interesting thing about this card: according to the back of the card, "no new trees were cut down to make the paper for this card." It's made from 50% recycled paper fibers and 50% sugarcane fiber. Neat. 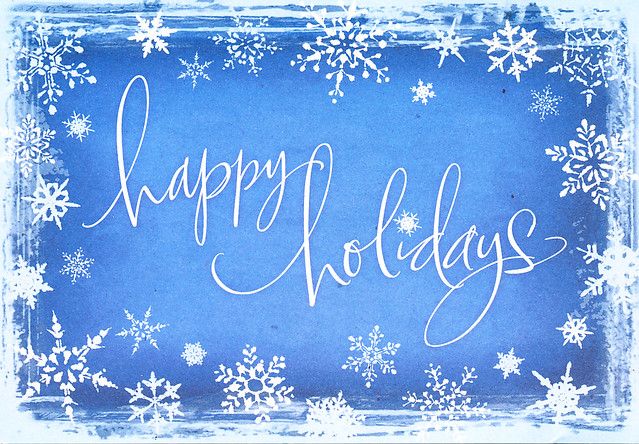