lapacifidora asked, "Other than Wayne & Garth hating it (and Vaughn moving there) what's wrong with Delaware?" I knew just the article to answer her question, but found it was trapped behind a firewall on the New Republic's website. But! The Madison Public Library, bless its heart, offers to its cardholders full access to the EBSCOhost Academic Search Premier Database, which contains The New Republic among its collections of magazines and newspapers. As a public service to those who want to know what's wrong with Delaware, here is the text of that article.

Rogue State
The case against Delaware

Until one day several years ago, I, like most people, harbored no ill feelings toward the state of Delaware. I suppose in some vague sense I thought of it as harmless and even endearing, the way you tend to regard other small things, such as Girl Scouts or squirrels. But all that changed the summer day I moved to Washington, when, making my way down I-95 in a rental truck with all of my worldly belongings, I screeched to a halt in front of what turned out to be a two-hour backup in Delaware. Never having driven down the East Coast, I at first assumed the traffic jam must have been caused by some horrific accident. But as my truck crept forward I saw it was no accident at all but a deliberate obstruction—specifically, a tollbooth on the Delaware Turnpike. Slowly the full horror of it sunk in: The State of Delaware had turned the East Coast's main traffic artery into a sweltering parking lot merely so it could exact a tribute from each driver crossing its miserable little stretch of concrete.

My original plan was to run these Heaton family holiday cards in chronological order, starting with my grandmother and ending with my younger sister. But I'm deviating from that slightly while I wait for some information my my sister-in-law about a card she sent a couple of years ago. So skipping ahead one we come to yours truly. I sent these Batman cards in... hm, 2003? Assuming I used "a couple of years ago" literally in this 2005 entry.

This picture of Batman, Robin, and Santa Claus was originally published as the cover of Batman #27, cover-dated February-March 1945. (Comics are dated several months in advance, so this would have been available on news stands in November and December 1944.) This was, incidentally, the first Christmas-themed cover ever to appear on an issue of Batman. Issue #15 featured a Christmas story (which you can read about at Comics Alliance), but the cover showed, bizarrely enough, Batman firing a machine gun. Hey, it was wartime, what are you gonna do. 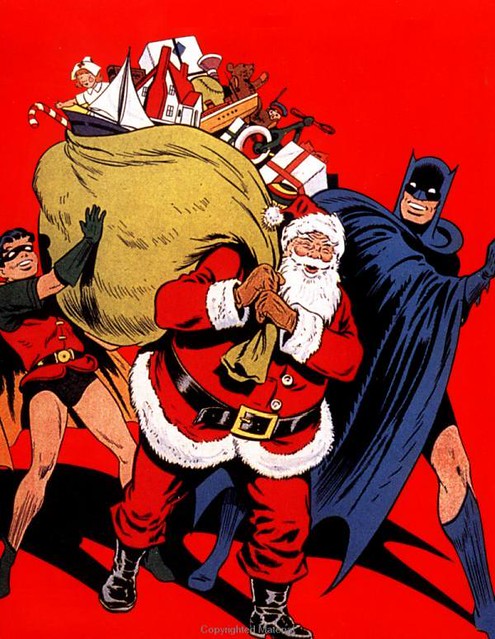