Happy new year, if you're into that sort of thing. I'm not. I think New Year's Day is unquestionably the lamest of all holidays, and utterly unworthy of special celebration. It's a new calendar year, but so what? The only things of any importance that are tied to the calendar year are income taxes and the Academy Awards.

Since I think observing and celebrating the start of a new calendar year is lame and stupid, I go to some effort each year to avoid observing and celebrating it. (Which, one my argue, is in itself an observation. I'm aware of the irony.) What I do is go to a movie on New Year's Eve that starts late enough in the day and runs long enough that I don't get out of the theater until after midnight. So not only am I unaware of when the new year officially starts, I'm in a place where it would be impolite of me to make note of it. This year, I chose Sherlock Holmes: A Game of Shadows as my New Year's Eve movie. All week, I'd been going back and forth on whether to go to that or Mission: Impossible – Ghost Protocol. What ultimately swayed me toward Sherlock Holmes was that earlier in the day I had finished re-reading Alice's Adventure in Wonderland (my first purchase for my new Kindle) and it occurred to me that there was a certain thematic consistency in seeing a film loosely inspired by another work of Victorian literature. And while that is not perhaps the most rigorously logical reason for choosing one film over another, it worked out pretty well, in that the movie was pretty enjoyable. Not a great movie by any stretch of the imagination, but it was big dumb explode-y fun, which was really all I wanted, so it all worked out.

Speaking of the new year, we have here a new year's card sent to me by my old TWoP Buffy forum pal

caerwynx. I've known her for quite some years now, and consider her a good friend, but somehow we've never managed to meet face-to-face. Pity, that. This card is a curious combination of modern and vintage; it's a Hallmark reproduction of a 19th-century card printed by an unknown publisher. That's one way to save money on design! Not to mention a good argument in opposition to perpetual copyright. 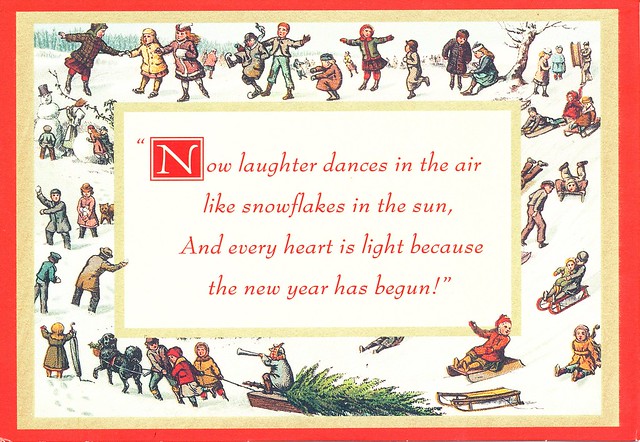