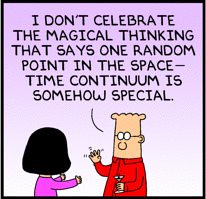 Happy New Year, if you're into that sort of thing. I am not; I agree wholeheartedly with Dilbert. I'll put up my new calendar, of course, but beyond that I will leave it largely unobserved.

Unless passive-aggressive anti-observing counts. I am, after all, writing about it, albeit for the purpose of griping about it. And I have a cherished New Year's Eve tradition of going to the movies. But I don't think that counts because I always choose a movie that starts late enough and runs long enough so that it gets out after midnight. So what I'm really doing is appropriating the primary cultural signifier associated with New Year's Eve -- staying up past midnight -- and subverting it by not only letting the new year arrive unobserved but by contriving to be in a place where observing it would be considered culturally unacceptable.

The movie I saw, by the way, was This Is 40. Which was OK, but not worth what I would’ve paid for it if I hadn’t gotten a Marcus Theaters gift card for Christmas. It was fitfully amusing at best, with the exception of a hilarious improvised rant by Melissa McCarthy that ran over the end credits. And it irritated me that Paul Rudd’s character, who was supposed to be a huge Pixies fan, said in one scene that “Debaser” was inspired by a film by Salvador Dali, when in fact it was inspired by Luis Buñuel’s Un Chien Andalou.

Anyway, back to my rant. There are two things about the new year that bug me: New Year’s Eve, and New Year’s Day. As to the former, I’m not a big fan of any of what I’ve come to think of as “drinking holidays,” which is to say the observances that are represented or promoted in American culture primarily as an excuse to go out and drink. (Aside from New Year’s Eve, the others are St. Patrick’s Day, Cinco de Mayo, and (for adults) Halloween.) Alcohol abuse is a big problem, especially here in Wisconsin, so I have a problem with the way people are encouraged to observe these particular events. (That said, I must confess that I took advantage of the extended service hours and free bus rides on Madison Metro Transit last night, which were paid for by Miller Brewing Company. I felt a little guilty about it though.)

As for New Year’s Day, I suppose my feelings toward it are similar to that of an atheist on Christmas. I find it infuriating that an event on which I place no importance is recognized as a Federal holiday, and one of the Big Six at that. And harkening back to my earlier comments about drinking holidays, I feel as though giving people a day off work on New Year’s Day effectively endorses the idea that that it’s acceptable to drink to excess on New Year’s Eve.

Also, it really irritates me that Madison Metro is running a holiday schedule today. Under normal circumstances, this would only irritate me a little bit – why does Metro Transit assume I don’t want to ride the bus after 7:00 p.m. just because it’s a holiday? – but owing to an unusual set of circumstances, tonight is different. See, for the first time in recent memory, there are a couple of college football bowl games I’m moderately interested in watching tonight: the Rose Bowl, in which the University of Wisconsin-Madison Badgers will be playing; and the Orange Bowl, featuring the Northern Illinois University Huskies. In the former case; I’m interested because of the odd path UW-Madison took to Pasadena; they finished a distant third in their division but went to the Big Ten Championship anyway because Ohio State and Penn State were prohibited from post-season play, and then they shocked everyone by beating University of Nebraska (which had beaten UW-Madison earlier in the season and had reached the championship game in the tradition manner, i.e. winning their division) by a wide margin. Then Wisconsin’s coach skipped town to take the head coaching job at University of Arkansas, so the legendary Barry Alvarez, who led the Badgers to three Rose Bowl wins as head coach in the 90s before stepping down to be Wisconsin’s athletic director, was recruited by the team to coach this year’s game. All of which leads me to think the game could be closer and more interesting than one might normally think of a game pitting an 8-5 team against an 11-2. (Plus I live in Madison, but that’s a distant third on the list. Wisconsin played in the Rose Bowl last year and the year before that too, and I didn’t care at all.)

As for the Orange Bowl, I grew up an hour away from Northern Illinois, and I know quite a few people who went there, including my grandfather, my dad, and my oldest friend. Plus they’re one of the mid-major teams that defied the odds by making it into a BCS bowl. I doubt they have much of a chance, but I think it might be fun to watch anyway.

But here’s the thing: I don’t have a TV. So to watch the games, I’d need to go to a bar or to the Wisconsin Union. Which normally wouldn’t be a problem, but as previously mentioned, the bus service tonight ends at 7:00. The Union is a good five miles from my house, so forget that. The bars closest to my house are both about a mile away, which is nothing … except it’s January in Wisconsin, and by the time the game is over, I expect the temperature to be in single digits. And you know, “moderately interested” and “mile-long walk in single-digit temperatures” don’t really go together that well.

Thus is my dislike of New Year’s Day reinforced.
Collapse