I got home last night and found a stack of my neighborhood association's quarterly newsletter on my doorstep, which means it's approximately the one year anniversary of my taking over the distribution of the newsletter to the houses on my block. I remember coming home one day last April and finding a copy of the newsletter at the door, and being surprised that the story on the front page was about an election forum was going to be held on March 20. A look at the indicia indicated it was the edition published and supposedly distributed in February. I emailed the editor, wondering maybe the distributor on my block had accidentally received a stack of old newsletters, but when I heard back, I was told it was just one of those hazards of dealing with volunteer labor; the newsletters had been delivered to the block captain, who had then neglected to distribute them until April.

It was probably not a coincidence that I was asked in the same email if I would be willing to be a distributor for my block. I said, sure! I managed to complete the first 3.7% of the job last night -- I handed a copy to my housemate -- and took care of the remaining 96.3% this morning before breakfast. It was a nice day for it, for a change; it's been some combination of cold or rainy the other times I've done it.

Later, I headed over to Tenney Park for the Earth Day Challenge work project and picnic I mentioned earlier this week. As I said, it's quite a nice day today, so we had a really nice turnout, representing a nice cross-section of the church membership, plus a number of the international students who take part in the church's International Outreach ministry and a few people from the neighborhood who aren't involved with the church at all. (We cosponsored the project with the neighborhood association (not the same one whose newsletters I distribute) and had promoted it on the neighborhood email list.) Also my sister, who was my work partner for the day. We assigned ourselves to trash duty and semi-circumnavigated the park picking up trash. 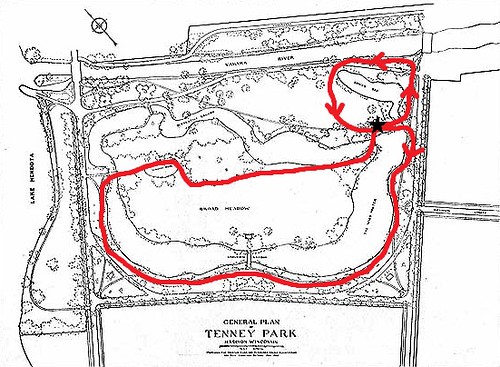 It got off to a bit of a rough start though. My sister and I grabbed bags and set off. I unfolded my bag and tried to open it, but couldn't. I took off my work gloves to get a better grip, but still couldn't get it open. Looking at it more closely, I determined there was a seam, so I rotated the bag 180 degrees and tried again. Still no luck, and it kind of looked like there was a seam on that side too, so I turned it over again and started anew on trying to get it open. I said to my sister, who had her bag open and was already picking up trash, "I don't think I'm smart enough to open this bag."

She paused and looked back, and said, "you're right." She came over to where I had stopped to struggle with the bag, took it from me, and rotated it 90 degrees. I had been trying to open it from the sides. What maked it all the more embarrassing was that it was a bag with a bright yellow drawstring, making it perfectly obvious where the top was. Oops.

Anyway, we picked up quite a lot of trash over the course of about 105 minutes. And let me tell you, while it didn't really seem like we were necessarily working that hard, the walking and stooping and so on does take it out of you. Luckily, I have no more public service projects on the docket today, so I can just take it easy for the rest of the day.
Collapse