It's Flag Day here in the United States, so let's talk about the U.S. flag. Specifically, the 49-star U.S. flag. 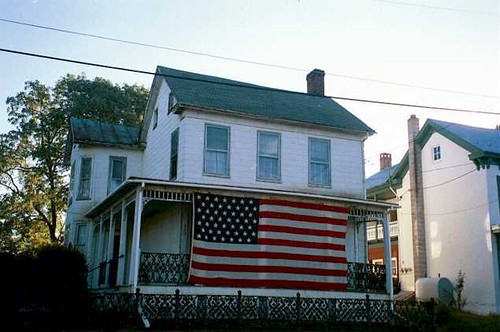 I have something of a fondness for historical curiosities, and as far as historic U.S. flags go, the 49-star flag is about as curious as they come. It was the official flag of the country for just one year: July 4, 1959 through July 3, 1960. That's not particularly unusual in and of itself; the same is true of quite a few others. What makes the 49-star flag unusual and, to me, interesting is that it accurately represented the number of states in the union for less than two months. Hawaii became the 50th state on August 21, 1959, just 52 days after the 49-star flag was adopted. That really tickled me when I first heard about it, which is why, when my Boy Scout troop added a flag to its historic flag collection to commemorate my earning the rank of Eagle Scout, I requested it be the 49-star flag.

(It should perhaps be noted that the 49-star flag does not hold the record for quickest obsolescence. The 43-star flag was adopted on July 4, 1890, and Wyoming was admitted to the Union as the 44th state six days later. However, the arrangement of stars on the 43-star flag is ugly.)

Because it was the official flag for such a short time, you don't see vintage 49-star flags very often. The picture above is the only one I've ever seen in the wild; I spotted it in Emmitsburg, Maryland, in September 2001. I remember turning around to take a closer look at it after driving past and getting the impression that it didn't look quite right. It's the bottom-right corner that makes it look off; a 50-star flag has one star in the bottom-right corner of the canton, while the 49-star has two.

My knowing the odd history of the 49-star flag contributed to a particularly memorable vacation experience. Back in 2002, I took a Memorial Day-weekend trip to Charleston, South Carolina, during which I visited Fort Sumter. I was part of the last tour of the day, and everyone in the group was given the opportunity to take part in the flag-lowering ceremony. Six flags fly over the fort: a large (20 feet by 30 feet) American flag; the 33-star U.S. flag that flew over the fort at the start of the Civil War; the Confederate Stars and Bars; the state flag of South Carolina; the "Stainless Banner" (i.e., the second national flag of the Confederacy); and the 35-star flag that was the official U.S. flag by the end of the war (West Virginia and Kansas having been admitted during the war). After the historic flags had been struck, we all gathered around the flagpole bearing the large U.S. flag. After a brief quiz about the U.S. flag, the ranger selected three people to lower the flag: a Boy Scout and a Girl Scout, and me, the one person who knew the 50-star flag had been adopted the year after the 50th state had been admitted to the union and therefore the only person who'd answered all the quiz questions correctly. Pretty cool.
Collapse