There was more to the trip than just missed connections and hastily rescheduled flights, of course.

After my brother Andy and niece Libby picked me up at BWI Airport, we headed back to the Heaton family homestead. I was just there overnight, but I took advantage of the time to rearrange the order of my queued Low Content Week journal entries to reflect that I had flown into Maryland instead of Virginia, and to watch the new episode of Food Network Star. I can't believe they cut Lovely! I am so sick of Rodney and his stupid hat.

Anyway, the next day we -- Andy, nephew Ikey, nieces Libby, Molly, and Lucy, and I -- piled into the car and made haste to Yogi Bear's Jellystone Park at Shangri-La, a family campground about two hours north. A Yogi Bear's Jellystone Park Camp-Resorts, if you're not familiar with the concept, is a franchise network of RV/camping parks; each one must meet certain standards and offer certain amenities -- a swimming pool, children’s playground, a covered pavilion, and so on -- in order to join the network and use the name, but are otherwise independent. My perception is that Yogi at Shangri-La is a bit more rustic than some, and more geared to people looking to be at a campground for the sake of being a campground rather than for its proximity to other attractions, like the one near me in the Wisconsin Dells, or to large cities, like the one outside of Milwaukee.

That said, it was quite nice. We were in a deluxe cabin, which lived up to the name, featuring a full kitchen, full bathroom with shower, an electric fireplace, a screened-in porch, and even Wi-Fi and a TV with cable. I ended up with a room to myself; the four kids shared two beds in a loft above the main room, where Andy slept on a sleeper sofa.I wasn't tremendously happy about the very steep and widely pitched staircase up to the loft, which made me nervous whenever the kids used it, but other than that it was pretty swank. There was also a fire ring right outside the cabin and a good-sized "back yard." The pool wasn't huge, but it was exceedingly well heated, and there was a wading pool that was very much to Ikey's tastes. (He's four, and doesn't swim yet.) The playground was pretty cool, including a three-story semi-enclosed play structure with a couple of spiral tube slides, a mini-rock climbing wall, a little trampoline, and whatnot. The three younger kids liked that a lot.

That first afternoon, we mostly just hung around the camp, visiting the pool and playground and shooting each other with Silly String. We took advantage of the fire ring to roast hot dogs and S'mores for dinner, then got into the car and drove to a nearby (and frustratingly GPS-resistant) drive-in theater to see Monsters University, which wasn't as good as Monsters Inc. but was pretty enjoyable. Both Andy and I were a bit troubled by the way MU seemed to redefine Scaring as a skilled trade that usually requires special training and a college degree, when in the first movie it had been portrayed as more of a blue-collar, working class sort of job. We're weird that way.

On Tuesday, we left the campgrounds to spend the day at Knoebels, an old-fashioned amusement park located about 25 miles away. It was a lot of fun for the kids, not to mention a fantastic bargain. Unlike most amusement parks, Knoebels charges no admission or parking fee, and each ride is individually priced, so you can spend as much or as little as you want. The kids each got an all-ride pass; Andy and I shared a book of tickets. We had a few tickets left over but the kids I think all got more than their money's worth from the passes. For my own part, I rode four rides: the Grand Carousel, a really nice antique merry-go-round; Motorboats, an actual full-sized motorboat you steer (not without some difficulty when you're 4) a moat; Crazy Sub, which rotates vertically and closely resembles but is legally distinct from a certain yellow underwater transport vessel with which you may be acquanted; and the Giant Wheel, a gondola-style Ferris wheel that takes you 110 feet up. Also, I had my picture taken with a clown: 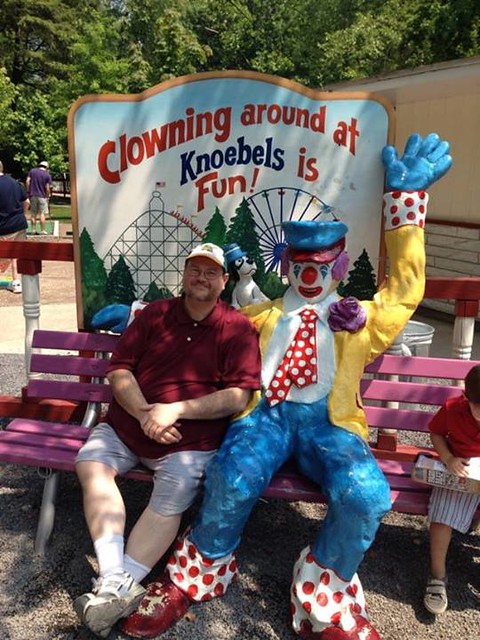 I'm the one on the left.

That evening we had planned to watch Shrek, which was scheduled to be shown at the campground, but it was rained out so we just hung around the cabin and watched bad sitcoms on the Disney Channel while packing to leave the next morning. Which we did, but not before one last trip to the swimming pool and stopping to posing for a photo with the campground's namesake: 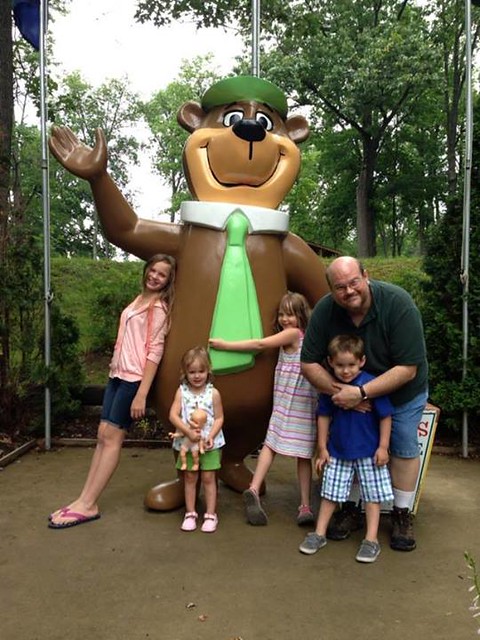 There was a "real" Yogi Bear there too; we saw him both mornings riding along on the Hey Hey Ride. But we never took the ride ourselves -- it didn't fit into the schedule very well -- so we didn't get to actually meet him. And Boo Boo, Cindy Bear, and Ranger Smith were not to be seen. They're around on weekends, I understand, but the campground population on weekdays isn't large enough to justify breaking out those costumes, I guess. Either that, or they were around in the afternoon and we missed them.

And then we were off, heading back to the homestead to get what we needed for our other camp.
Collapse