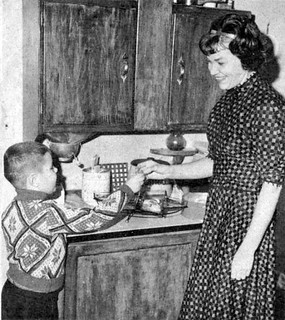 Five years ago today, on what would have been her 76th birthday, I posted a list of notable events that had occurred in the ten years since my mom died. Mom would have turned 81 today, so let's take a look at what she's missed since then.

Two more grandchildren, and her two oldest grandkids starting college. She'd be delighted by both, of course, but I imagine the latter would have made her feel awfully old. She told me once that she didn't think that turning 30 was a sign of getting old; your children turning 30 was. I don't suppose have two grandkids in college would have made her feel any younger. It's a shame that she only ever knew one of her grandkids, but they all know of her as their "angel grandma."

My brother's move to Gettysburg. As I've mentioned before, my mom was a big Civil War buff, and she would have been tickled pink that her son was not only living in Gettysburg, but in a pre-war house that still has cannonballs embedded in the walls.

The election of Barack Obama. But she'd be disappointed by much of his presidency, the Lily Ledbetter Act and the appointment of two more women to the Supreme Court notwithstanding. She'd be particularly incensed by this talk of bombing Syria. However, she would be even more incensed by the modern Republican party, what with their voter suppression and their assault on women's health care and whatnot, so she'd be grateful he was in the White House instead of McCain or Romney.

Nightline switches timeslots with Jimmy Kimmel Live! This also would have incensed her. She was a loyal and faithful Nightline viewer, having watched it from the very beginning, when it was a nightly update on the Iranian hostage crisis. She wasn't necessarily opposed to late-night talk shows -- I remember her watching The Tonight Show in the pre-Nightline era -- but she was something of a news junkie, and I don't know that the offerings on CNN or MSNBC at that time would have scratched her itch.
Collapse