I neglected to mention that as of last week, my church choir has started up its weekly rehearsals after the summer hiatus. Hooray! 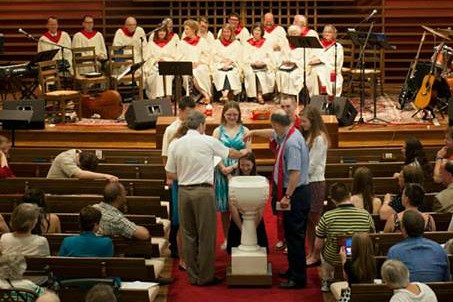 Photo by Greg Anderson, via Christ Presbyterian Church on Facebook

It's hard to overstate how important choir is to my church life. From third grade on, when I've attended church regularly, I've been a member of a church choir. In fact, a large part of why I resumed going to church after stepping away from it in college was because I discovered I wanted to start singing again, and the local church afforded me the easiest opportunity to do so.

That was back in 1996, when I moved to Virginia. The first time I passed through the tiny village of Waterford, on the way to see the house I eventually moved into, I was immediately taken with the little Presbyterian church on High Street. I seem to recall describing it as "a cute little church."

One day not long after I moved in, I dropped by the church one afternoon and determined, after walking around the building, that it was, from the outside at least, a cute little church. But I couldn't get in, nor could I see anything through the stained glass windows, so I decided to attend a service, just to see what it looked like. So I did, without any particular intention of attending regularly, but I was welcomed warmly by the greeters and by the people sitting near me in the pews, and I heard the choir sing, and I just felt right being there. So at the end of the service I introduced myself to Betty, the choir director, and on the following Sunday I was in the choir loft.

When I moved to the eastern part of the county, I was without a church home for a time. The first few churches I visited didn't engender that right feeling in me, and I was severely limited in where I could go by not having a car and the public transit system not operating on weekends. Eventually, I stumbled on the local Unitarian Universalist congregation, and that did feel right. But I didn't commit myself to attending services there regularly until I had the chance to hear the choir. I'm not necessarily saying I wouldn't have continued to attend services there if the choir hadn't met my standards, but it's unlikely I would have thrown myself into the life of the congregation if it hadn't.

It is, however, definitely true that when I was church shopping in Madison, there were a number of churches that failed to make the list of churches I planned to visit because they didn't have a choir, and at one that I visited but dropped from consideration because the choir didn't sing every week. And a big part of the reason I ended up where I did was because they continued to sing during the summer, while my other finalist did not.

But like I said up top, even though the choir sings in the summer, it doesn't rehearse, except for during the hour before the service. So it's always very exciting when the summer ends and we resume the Thursday night rehearsals. It's almost always one of the highlights of my week!
Collapse