Toward the end of the last school year, the Badger Herald, one of the two daily newspapers produced by UW-Madison students, announced it was moving to a semi-weekly print schedule. Stories would be posted daily on their website, but there would be just two print editions, published Monday and Thursday.

My main concern with this new publishing strategy was, of course, the effect it would have on my hobby of solving crossword puzzles. As I believe I've mentioned before, the Badger Herald runs the New York Times crossword, which is the crown jewel of newspaper crossword puzzles. I had already had to adjust to losing the Friday puzzle when the BH eliminated its Friday edition last year, and I wasn't happy about having to give up the Tuesday and Wednesday puzzles too.

The new paradigm turned out to be a little better than I'd anticipated; yes, I'm only getting two puzzles a week, but they're both on Thursday. Since the NYT puzzles get harder as the week progresses, that means I'm getting two reasonably challenging puzzles instead of one that's reasonably challenging and another that's very easy. Personally, I think they should also be running two puzzles on Monday, and a third on Thursday -- when they eliminated the Friday edition, they compensated by running a second puzzle on Tuesday, so there's precedent for running five days' worth of puzzles on a less-than-five-day publishing schedule -- but I shan't complain. Complain further, I mean. Except for the following complaints about the puzzles that ran yesterday: 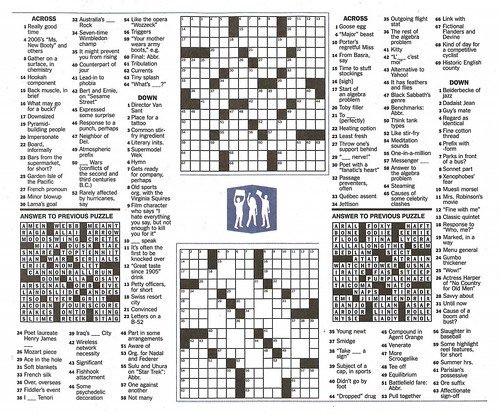 First of all, these are recycled puzzled, by which I mean they already ran them during the last school year. Those extra-large squares in the lower grid are unmistakeable, and I recognized the theme of the upper when I started to solve it. That's not a terrible thing -- having solved them once before didn't make it any easier for me to answer [Supermodel Wek] -- but it is mildly annoying.

Far more annoying was the way the clues were presented. You see how there's a thin blue line around three sides of each grid that extends above or below the clues? I took that -- as would anyone, I think -- to mean that the clues on the left were for the top grid, and those on the right for the bottom. But in fact the opposite was true, a fact I didn't discover until I'd already filled in 1- and 2-Down on the lower grid using the right-side clues and was pondering what three-letter word meaning [Guy's mate] started with BA. I would've tumbled to it much quicker had I paid closer attention to the numbers of the across clues -- the second clue on the right is 6-Across, but in the lower grid the second answer is 4-Across -- but I started with the downs because the answers to the first three clues were so obvious to me.

Even more annoying was the column layout. It's a little hard to make out in the picture above, but both sets of clues are laid out in a truly bizarre fashion. Note that the down clues start in the third column and run down the page until they reach not the bottom of the column, but the bottom of the solution to the previous puzzle. Then you have to skip over to the lower portion of the first column, i.e. the portion that appears below the solution, and thence down and across the three columns. What the hell is that? Columns don't work that way!

I don't even understand how the weird column layout happened. Let's say that for some reason, the Badger Herald's layout program automatically created that dumb layout. What rational human would look at it and not realize how messed up it was? But by the same token, what rational human would design it like that intentionally? Granted, college students do a lot of fundamentally irrational things, but still. I suppose it's possible no one bothered to look at it, but what self-respecting journalist would do something like that?
Collapse