I made my first visit to Madison's new central library this morning! There's hardly anything I like more than libraries, so naturally this was a major even for me. And for a lot of other people too. The place was packed! I've rarely if ever seen so many people in a library.

But why wouldn't it be crowded? There are a lot of library lovers in Madison, and the tiny temporary location notwithstanding, we've been without a central library since March of last year. Plus the old one was kind of a dump, so I think there was a lot of curiosity to see how much better the new one was. I mean, that the new one was an big improvement was obvious just from the outside: 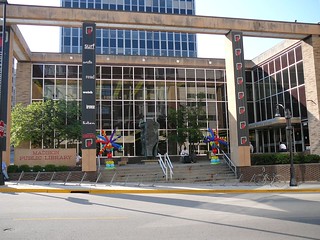 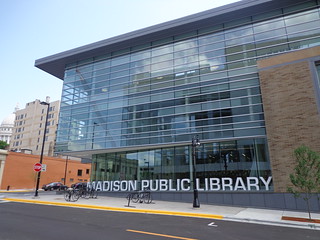 (I should note that the new library is not entirely new, but rather an expanded and extensively remodeled version of the old one.)

Just that one corner of the building represents two major changes for the better. The old plaza was a gathering place for Madison's homeless community, which made a lot of visitors uncomfortable and even dissuaded some people from going to the central library at all. It never bothered me personally, but I know it was an issue for some people, and by eliminating that gathering space, they're also eliminating that issue. Instead, the library is trying to encourage the homeless to come inside, by taking advantage of the extra square footage to provide space to a variety of social service agencies to help them find more permanent housing, medical treatment, and work; and to offer more programming aimed at the homeless, like book clubs and movie matinees. The other change for the better: that ugly statue now resides on a small rooftop plaza, where it works much better. I always thought that it was too small for that plaza; being in a smaller space works to its benefit. (It's still ugly though.)

The interior is also much improved. the old library was, in the words of a columnist for the local indie weekly, "dark, cavernous and depressing;" the new one is spacious and brightly lit.The old old children's section was shabby and drab; the new one is brightly colored and shiny. And there's a bunch of other cool stuff: a cafe serving Parisian hot chocolate, tarts, and eventually various coffee drinks! A green roof! An arts and crafts workshop! It's all so cool!

I'll probably continue to use my local branch more often than the central branch. But it's nice to know there's such a cool new library reasonably close at hand.
Collapse