As I said I would, I attended a UW-Madison women's hockey game with my college pal Scott yesterday afternoon. 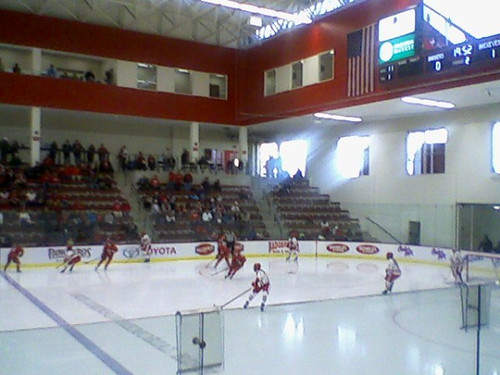 I was rooting for the team in red and white.

I had a really good time, and he said he did too, and the girls sitting in front of me had fun coloring my fingernails with crayons, so I'd say it was a successful day for all concerned, except maybe for the Ohio State University team, which lost.

One thing Scott and I have in commons is that we don't fully understand hockey. He knew the basics, I knew a few other things, but the finer points of the game are beyond us. Which is fine; unlike tennis, you can still get a lot out of watching a hockey game without understanding, say, what icing is. However, very near the end of the game, something happened -- a shoving match between the two teams, I learned later -- that stopped play for a few minutes and resulted in two players being sent to the penalty box and a third being sent off the ice altogether. Neither Scott nor I were sure what exactly had happened, so I told him I'd send him a link to an article about the game from one of the two student newspapers, which I assumed would make things more clear.

So this morning I snagged copies of the Badger Herald and the Daily Cardinal. The latter had a a single page of sports news, containing articles about Saturday's football game and Friday and Saturday's men's hockey games, and a blurb about the men's cross country team failing to win their 15th consecutive Big Ten championship. The former had three full pages of sports news, but wasted most of the space on multiple articles about single events. There were two virtually identical articles about the men's hockey games; two virtually identical articles plus an opinion column about the football game; and an article about the women's soccer team earning a trip to the Big Ten conference tournament. They also ran three scores across the top of the first page of the sports section, two of which were for the football and women's soccer games that had full articles written about them.

These days, the Herald fancies itself an online-first news outlet, but their coverage on the web was no better than what appeared in print. There was an article about Sunday's men's soccer game, plus a second article about the women's soccer game and a feature about the team, and everything else just duplicated what I saw in print. Nine articles about four varsity sports. The Cardinal did a bit better; they had articles about the women's volleyball and women's hockey games online, plus they managed to restrain themselves to one article each for football men's soccer, men's hockey, and women's soccer. Neither provided any coverage of swimming and diving, or women's rowing, or women's basketball, or men's golf, all of which competed over the weekend.

Look, I understand that student newspapers have limited resources, and that there may be no practical way to cover a swim meet in Berkeley or a golf tournament in South Carolina, but come on, they could at least acknowledge that those sports were competing. That's why agate type was invented, to print sports results that no one has time to write about. And there's certainly no need to waste valuable column inches printing multiple articles containing identical information about single events.
Collapse