I happened to glance at the FAIL Blog 2013 wall calendar today, and was surprised to see something I recognized. I didn't have the means to scan the image while at the store and I couldn't find the original on FAIL Blog, but I did find this similar image elsewhere on the web: 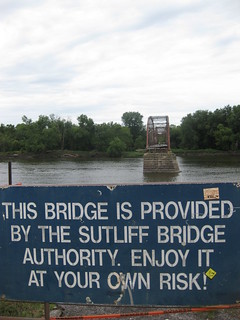 Ha ha! It's funny because a massive flood destroyed a treasured historic site!

Those in the know will recognize that abbreviated span as Sutliff Bridge, a historic bridge located in Johnson County, Iowa. Back in the day, it carried vehicular traffic across the Cedar River, but after it was decommissioned in 1983, a group of local citizens formed a non-profit organization, the Sutliff Bridge Authority, to preserve the old bridge as a historical site and pedestrian bridge.

Sadly, the easternmost span of the bridge was washed away in the big flood of 2008, which I found quite distressing, because my friends and I were frequent visitors to the bridge during my years at Cornell College, which is just a few miles north of Sutliff. Sometimes we went to the tavern on the east side of the river; other times, we went to the undeveloped wooded area on the west side and (almost certainly illegally) built a bonfire.

After the flood, the SBA started raising money to rebuild the part of the bridge that had been destroyed, and last year the bridge reopened. Hooray! I believe they also added a boardwalk on the west end, making it a lot easier to reach the place where we used to build our bonfires -- there was no way down to the ground from the west end of the bridge back when I hung out there, so you had to approach it via an unimproved, unmarked, possibly privately owned access road on the yon side of the river -- but also making it more likely that anyone building a fire there would get caught. Oh well, it's not like I was planning to do that anyway, and having the rest of the bridge back makes the loss of our illicit campfire spot palatable.
Collapse