Today's Advent artwork is dedicated to

caltrask55 (and Fang!), who recently sent me a lovely Christmas card, featuring a painting of the Virgin and Child that I would have happily featured as part of this project if it was part of a Washington, D.C., museum collection. Thanks! 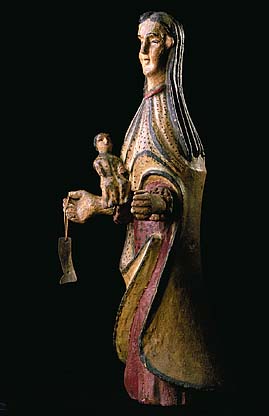 From Arte Latino: Treasures from the Smithsonian American Art Museum:

The Lares group is not, strictly speaking, a group, but rather a style associated with objects from the Lares region of western Puerto Rico that emphasize expression, personality, and spontaneity. The Madonna, who embodies grace, purity, and the benevolence of motherhood, is venerated in many different forms, each of which has identifiable characteristics. The specific meaning of this Virgin is unknown, however, because the object she once held has been lost. The small leg that dangles from her hand is an offering (milagro) that was added by someone asking for her help with a medical problem.

I never would have guessed that the object held in Mary's right hand was a leg. It's not a concept that springs readily to mind.