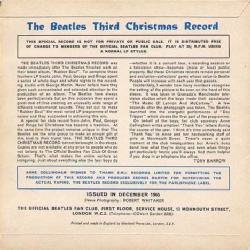 Here's something a little different… not a card, obviously, but it was sent via mail during the Christmas season, so close enough. Anyway, this was the third of seven Christmas records sent to members of the Official Beatles Fan Club Of Great Britain from 1963 to 1969. Here's the text of what was printed on the back of the sleeve:

THE BEATLES THIRD CHRISTMAS RECORD was made immediately after The Beatles finished work on their latest album "Rubber Soul". To complete those fourteen LP tracks John, Paul, George and Ringo spent a series of whole days and whole nights in the recording studio with George Martin. Never before have they given such concentrated and extended attention to the production of an album. The Beatles have always been perfectionists but on this occasion they spent a great deal of time creating an unusually wide range of different instrumental sounds. They set out to make "Rubber Soul" the most varied LP programme of their career and they succeeded in achieving this aim.

A special fan club record from John, Paul, George and Ringo for Christmas has become a tradition. At the same time the project remains unique in that The Beatles are the only group to make an annual gift of this kind to their truest fans. THE BEATLES THIRD CHRISTMAS RECORD cannot be bought in the shops. Copies are not available at any price to people who do not belong to The Official Beatles Fan Club Of Great Britain. That's what makes the entire venture so intriguing. Just about everything else the four boys do whether it is a concert tour, a recording session or a television show becomes (more or less) public property. But these Christmas records remain personal and exclusive collectors gems whose value to Beatle People will increase with each year that passes.

Incidentally, I wonder how many members recognise the setting of the picture to be seen on the front of this sleeve. It was taken in Granada's Manchester television studios when the boys made their spectacular "The Music Of Lennon And McCartney." A few seconds after the photograph was taken, The Beatles launched into the energetic performance of "Day Tripper" which closes the first part of the programme.

On behalf of the boys, fan club secretary Anne Collingham writes umpteen Thank You letters during the course of the year. I think it's time somebody said Thank You to Anne and her hardworking staff of girls on Monmouth Street. There's never a quiet moment at the club headquarters but Anne's busy band love what they're doing and even when things get particularly hectic you'll always find them helpful if you drop in or telephone the office.

Today, of course, is the 25th anniversary of the murder of John Lennon. I don't remember exactly when I became a Beatles fan, but I remember the circumstances. One night, I happened to see a television special about the Beatles—I'm going to guess that it was in 1974, commemorating the tenth anniversary of their first visit to the United States—and I was surprised to learn that they had recorded a lot of songs I recognized from the radio. From there on out, the Beatles were my favorite band.

I do remember exactly when I heard that Lennon had been killed. It was the morning of December 9, 1980. My mom told me just after I entered the kitchen to eat breakfast. And I remember my exact words to her: "Why didn't you wake me up to tell me!" That night, lying in bed, I heard "Imagine" on the radio and started crying so hard I started to hyperventilate. It took my parents a good half hour to calm me down so I could get to sleep. Even today, even right now as I type this, I still get teary-eyed (at least) when I think of it.