It snowed in Madison last night! 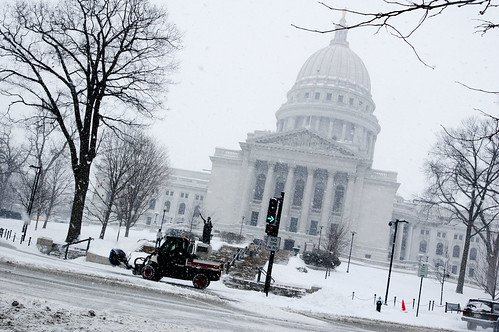 Well, early this morning, technically. A coworker told me last night she'd heard we were going to get 14 inches, which I took to mean she'd heard that parts of the Madison area could get up to that amount. I've noticed people tend to assume the high end of the predicted range of snowfall will always be what actually falls, even though that's rarely the case. It certainly wasn't the case today; I'd estimate we got about 6 inches at best. Not nothing, but hardly the apocalyptic storm that I heard people worrying about at the mall last night.

Still, it was enough to convince the pastor of my church to cancels services this morning, which gave me a chance to sleep in -- for the second say in a row! -- do a couple loads of laundry, and finish The Cuckoo's Calling, the detective novel J. K. Rowling wrote under the pseudonym Robert Galbraith. It was really good! It's interesting to compare this to Rowling's other "adult" novel, The Casual Vacancy, which I finally got around to reading a few months ago. That book was fine, but it didn't have the spark that the Harry Potter books or The Cuckoo's Calling did. My after-the-fact impression is that she wasn't as passionate about it as she was about the others, that she wrote it more to prove she could write something that was nothing like the Harry Potter books than to satisfy a deep-seated need to tell that particular story. Conversely, Rowling said in interviews after she was revealed to have written The Cuckoo's Calling that she loved whodunnits and and had always wanted to write a detective story, and that really came across on the page.

In those same interviews, she said she's already written a second book featuring the same protagonists, and having now read the first I'm really interested in reading the second. And the way she portrayed the relationship between the older detective and his plucky female assistant also made me really interested in seeing what she could do with a Doctor Who script. And speaking of Doctor Who, check out the cool scarf my brother and his family sent me for Christmas: